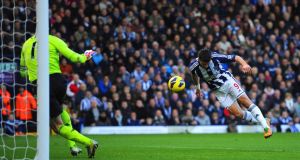 The marketing of alcohol products in sport is far more subtle and widespread than commonly acknowledged, according to new research.

A study of televised football matches published today shows that spectators are subjected to two instances of “embedded” drinks marketing per minute.

The UK researchers counted each time marketing images – such as pitchside billboards – were depicted on screen along with any spoken reference to alcohol products.

In 18 hours of televised football that they studied, they found 2,042 references to these products or 111 per hour, averaging nearly two per minute. There were 32 spoken references to alcohol, for example that a team might celebrate by drinking after the match.

The sample television footage covered matches in January and February 2012 in the Premier League, Europa League, Carling Cup and other competitions, including the warm-up and post-match programming.

Dr Jean Adams of Newcastle University’s Institute of Health and Society said drinks companies in the UK spend about €236 million a year on direct advertising but more than €700 million on passive marketing and sponsorships.

Much of this goes on “embedded” marketing, for example the beer and alcohol banners seen around sports pitches during matches, she said at the Festival of Science which is under way at Newcastle University.

She released the new study into how this money is used with co-researcher Andy Graham, a registrar in public health for the North Deanery, Newcastle.

“This kind of thing matters,” she said. There was a “constant bombardment”of alcohol marketing “which we know is harmful to our children,” she said.

Recent studies had shown that 96 per cent of 13-year-olds in the UK were aware of the embedded marketing and that as many as 5.2 million four to 15- year-olds saw this advertising during the 2008 European Championship.

The study, published today in the journal Alcohol and Alcoholism, found that direct advertising of alcohol products occupied 1 per cent of the 18 hours of sample broadcasting – so most of the alcohol promotion involved embedded advertising.

Effectively this marketing was “nonregulated” with controls self-applied by companies, said Dr Adams. “We should consider having more enforceable regulations.” She said the regulations focused on advertising but did not affect embedded marketing.

Lots of controls had been brought in for cigarettes, she added. “I think they have to be considered for alcohol.”

Communicable diseases were traditionally the big worry for health services but now lifestyle diseases have a greater impact, he said.