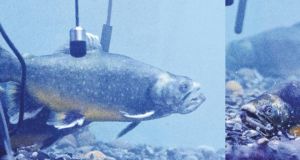 To coax the fish into breeding, researchers have tried to recreate its natural spawning conditions in freshwater tanks

What does the fish say? New research at Galway-Mayo Institute of Technology (GMIT) aims to shed light on just how vocal a unique Irish fish is. Biologists hope to discover whether Arctic char, a deepwater inhabitant of Irish lakes, vocalise. during courtship and spawning.

Researchers hope that, by recording char in the lab, they can use its unique call to pinpoint where it spawns in lakes in the hope of offering it better protection.

About 700 species of bony fish are known to vocalise. Most do this by contracting their swim bladder to produce pulsating drum-like calls. In many species, sound is produced by males as they compete with each other and try to attract mates.

Sound travels farther underwater than light, says PhD researcher Marta Bolgan, and it doesn’t dissipate as quickly as chemical signals, making it a logical communication medium for fish. But fish acoustics are poorly understood compared with those of aquatic mammals such as whales and dolphins, and freshwater fish are the least-studied of all.

At a fish farm in Galway, Bolgan has recorded what seem to be sounds produced by Arctic char. She believes these may be the first Arctic char vocalisations recorded by scientists. Bolgan now hopes to record the species spawning in the lab to confirm whether it vocalises, and to figure out why.

To coax the fish into breeding, she tries to recreate its natural spawning conditions in freshwater tanks: cold water temperatures (6-8 degrees) and a short daylight period recreated using lamps.

Bolgan keeps male and female char separately, but once the females are ripe with eggs, she transfers two males and one female to an observation tank. For the first two days she keeps the sexes separate using a divider.

Each time, the males appear to compete until one has established dominance. “One male keeps swimming around the tank and the other hides,” she says. Often the female will dig a nest in the gravel bedding to prepare for spawning.

But there’s one catch: of the nine pairs she has observed at the time of writing, none have completed spawning, and Bolgan has yet to hear any vocalise. She says that because her char are from farmed populations, they may have lost the ability to breed naturally, or her observation tank may be too small for spawning.

Later this year, Bolgan will record underwater at Lake Windermere in Cumbria, where the exact location of char spawning grounds is known. She’s hoping to film the fish here too. This should provide better evidence as to whether wild char vocalise during the breeding season.

But even if Arctic char aren’t vocal, they’re still likely to use sound. Bolgan says all fish hear and use sound to pick up information about their environment – for detecting prey, avoiding predators and locating spawning and feeding grounds.

Research has shown that many species of reef fish use acoustic information to locate their spawning grounds. “The soundscape is like a fingerprint. Every area sounds different,” she says.

Scientists don’t know how salmon locate their spawning grounds, but sound could provide one explanation. A research student at GMIT now hopes to record salmon vocalising at the Marine Institute facility in Mayo later this year.

Understanding fish acoustics is vital for their conservation, says Bolgan’s supervisor, biologist Dr Joanne O’Brien. The idea is to minimise human noise at critical points in their life cycle. One of O’Brien’s long-term goals is to set up underwater recording stations in Irish lakes to monitor fish populations remotely.

While marine mammals tend to communicate in a wide range of frequencies, fish use the same low frequencies occupied by noise from human activities such as shipping, putting them at greater risk.

“Noise affects fish and mammals in the same way,” says Bolgan. If I’m trying to speak with you and the noise gets louder, I don’t hear you.”

“So if my point in the communication is to aggregate with you to reproduce, maybe I don’t hear you, maybe I don’t manage to catch you, and reproduction fails.”

Marta Bolgan’s PhD at GMIT is funded by the Irish Research Council, while her research at Lake Windermere will be supported by the Marine Institute

Arctic char arrived in Ireland after the last ice age ended, more than 10,000 years ago. The species, a member of the salmon family, lives in the cold climates of the northern hemisphere and survives farther north than any other freshwater fish.

Like salmon, most Arctic char populations feed in the sea and migrate up rivers to spawn. But the Irish population is unique, spending its entire life cycle in freshwater – mostly in deep, cold lakes near the west coast.

One theory suggests that, after the ice sheets retreated, Irish char populations simply stopped migrating to warming seas, where competition and the risk of being eaten was higher. It has remained isolated in Irish lakes for millenniums.

Arctic char has been recorded in more than 70 Irish lakes, but is believed to be extinct in about a third of these now. It is rated as “vulnerable” on Ireland’s red list of threatened species, and its decline has been linked to the introduction of non-native fish. It requires cold, well-oxygenated water, so is also threatened by pollution and climate change.

The species spends most of the year in deep water, but comes up to shallow lake beds to breed in late autumn and winter. The female digs a nest and releases her eggs, which the male fertilises externally. But little is known about the specific spawning behaviour of char in Ireland or the exact location of breeding sites.