American researchers say the solar system may host a ninth planet that is about 10 times bigger than Earth and orbiting far beyond Neptune. Video: Reuters 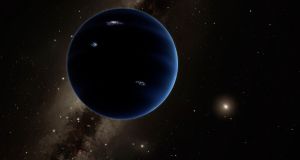 This concept illustration shows a distant view from Planet Nine back towards the sun. Photograph: HO/Caltech/AFP/Getty Images

Evidence of a hidden giant planet on the fringes of the solar system has been uncovered by scientists using computer simulations.

The mysterious world, nicknamed Planet Nine, is about 10 times more massive than the Earth, thought to be gaseous, and similar to Uranus or Neptune.

Scientists believe it traces a highly elongated orbit and takes between 10,000 and 20,000 years to make just one journey around the sun.

Planet Nine is, on average, about 20 times further from the sun than Neptune, which orbits at a distance of about 4.5 billion kilometres.

Once there were thought to be nine planets in the solar system, but then the outermost, Pluto, was demoted to the status of “dwarf planet”.

There is no doubt that the new world, which has not yet been observed directly, is a “true” planet.

Professor Mike Brown, from the California Institute of Technology (Caltech), one of the astronomers who announced the discovery in the Astronomical Journal, said: “This would be a real ninth planet. There have only been two true planets discovered since ancient times, and this would be a third.

“It’s a pretty substantial chunk of our solar system that’s still out there to be found, which is pretty exciting.”

Planet Nine has 5,000 times the mass of Pluto, which inhabits a ring of rocky bodies beyond Neptune known as the Kuiper Belt.

Its existence was inferred from the gravitational influence it has on several Kuiper Belt objects with highly unusual orbits.

Computer simulations confirmed that a large new planet was the most likely explanation for the observations.

The clinching evidence came from a prediction that a ninth planet would result in Kuiper Belt objects having orbits inclined perpendicularly to the plane of the planets.

In the last three years, four objects were found that behaved in this way.

“We plotted up the positions of those objects and their orbits, and they matched the simulations exactly,” said Prof Brown. “When we found that, my jaw sort of hit the floor.”

His Caltech colleague Dr Konstantin Batygin said: “Although we were initially quite sceptical that this planet could exist, as we continued to investigate its orbit and what it would mean for the outer solar system, we became increasingly convinced that it is out there.

“For the first time in over 150 years, there is solid evidence that the solar system’s planetary census is incomplete.”