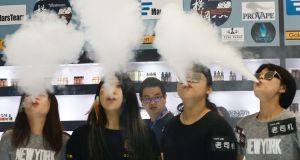 E-cigarette vapour contains two previously undiscovered toxic chemicals which are likely to be carcinogenic, according to a new study.

Researchers have found that these toxic substances are generated when “e-liquids” are vaporised.

The sources of these toxic chemicals are two solvents found in almost all e-cigarettes, propylene glycol and glycerine, which are used to create artificial smoke.

While the solvents are considered safe for use in food, few studies have examined their potential toxicity when inhaled.

“Advocates of e-cigarettes say emissions are much lower than from conventional cigarettes, so you’re better off using e-cigarettes,” said Dr Hugo Destaillats, the lead author of the study, which was published in the journal Environmental Science and Technology.

“I would say, that may be true for certain users - for example, long-time smokers that cannot quit - but the problem is, it doesn’t mean that they’re healthy. Regular cigarettes are super unhealthy. E-cigarettes are just unhealthy.”

“People are not drinking the liquids - they’re vaping them,” said Mohamed Sleiman, co-author of the work. “So what counts is the vapour.”

The scientists simulated vaping in the lab and tested three types of e-liquids in two different vaporisers.

They then used gas and liquid chromatography techniques to find out what compounds were in the vapour.

Heating up these solvents resulted in detectable levels of 31 different harmful chemical compounds.

Scientists also found that emissions of harmful compounds increased as the e-cigarettes heated up to a steady temperature.

For example, the levels of acrolein - a severe eye and respiratory irritant - increased 10 times as the e-cigarette reached a steady temperature, compared with the first five puffs.

However, the researchers also pointed out that using the e-cigarette at lower temperatures does not make it safe.

“We found there are emissions of toxic chemicals at any temperature at which you use the device,” Dr Destaillat said.

Reusing the e-cigarette several times without cleaning it and using it at high voltages can also increase the levels of these harmful substances, scientists say.

The Irish Cancer Society has said it cannot recommend e-cigarettes given the lack of research into their effects.

The Department of Health continues to monitor research on the potential harms and benefits of these products, a spokeswoman for the department said.

She said the department would “of course” consider the evidence in this new study.