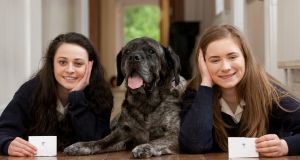 Dog nose prints may replace microchipping as the ideal way to identify a dog and its owner, according to two students who will take part in the BT Young Scientist and Technology Exhibition at the RDS this week.

In the same way that humans have unique fingerprints, dogs have unique nose prints, according to Rachael Millea and Saoirse O’Reilly of Dominican College Wicklow.

They wondered whether nose ID might be better than microchipping to identify a dog and found that, in fact, canine prints are unique. Indeed, nose prints have been used by the Canadian Kennel Club since 1938.

The students believe nose prints could replace chipping and might also be useful in identifying other species, such as upland sheep.

And while a microchip may fail or even become dislodged, a nose print will always be available, they say.

The two young scientists also hope to develop a database of dog nose prints in Ireland and develop an app to upload the prints.

Their project is among the 550 that will be on display at the RDS from January 6th-9th.

Record numbers submitted projects to the event, which continues to be hugely popular with students and teachers. Upwards of 60,000 visitors are expected, making it one of the largest such events in Europe.

Two other young scientists have integrated their love for ballet into an intriguing project related to dancing on the tips of your toes. “En pointe” dancing involves wearing special slippers and rising up on the tips of the toes, which is considerably painful for some dancers.

Hannah Piggott and Hannah Devitt of Seamount College, Kinvara, Co Galway aim to discover if foot shape is connected to whether a dancer experiences pain.They plan to study what parts of the foot cause the most pain and how overall foot shape influences this.

The two carried out a series of measurements and tests to study foot shape and want to see if toe and arch shapes are connected to pain.

Both are Grade 7 student ballerinas with the Corrib Dance Academy in Galway and have been dancing en pointe for three years. So they will be very interested in the research results themselves.

Olivia Fleming and Bethany Petrie’s BT Young Scientist project looks at mycelium collected from funguses, such as mushrooms, and its ability to provide high-quality insulation that is 100 per cent biodegradable but grown at a relatively low cost.

They set up a series of experiments that tested their insulation material, which would compete against mineral wool, polystyrene beads or foamed insulation using polyurethane.

Most insulation material resists degradation and ends up in landfill, but mycelium readily biodegrades, they say.

As part of their project, they visited a leading insulation manufacturer and discussed their plans with experts in mushroom growing.

Living near the sea encouraged Kate Considine and Sarah Nagle of Mary Immaculate Secondary School, Lisdoonvarna, Co Clare to do a project based on seaweed. They are looking at factors that affect the size and density of the bladders on bladder wrack, Fucus vesiculosus.

They described how they liked to pop the bladders when younger, but now they want to see if the bladders vary in relation to the shoreline.

The bladders allow the seaweed to float upwards when the tide comes in. They are assessing whether bladder wrack on the lower shore at greater depth has different bladders to weeds closer to the shore in shallower water.

The students combed the beaches at four locations in north Clare and are using a computer programme to study the surface area of the fronds.

“Every year students from all around the country demonstrate the talent and capabilities of Irish youth when given the opportunity,” Walsh said. “And as the exhibition grows, the ideas only seem to be getting better.”

The BT Young Scientist and Technology Exhibition opens and judging begins at the RDS on Wednesday, January 6th. It opens to the public on Thursday the 7th and closes on Saturday afternoon.

There are live shows, exhibitions and lots of fun for children and parents alike. Tickets are available at the door (€6 for students, €12 for adults, €25 for a family pass of two adults and two children).

Find out more about the exhibition at btyoungscientist.com