To see a 3.7% increase in lung function from therapy is considered a ‘promising finding’ 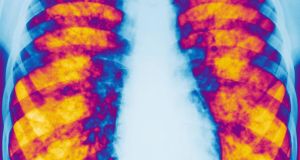 Trials of a new treatment for cystic fibrosis (CF) have delivered “a significant if modest benefit” for patients who experienced an improvement in lung function.

The results have been met with an enthusiastic response from Cystic Fibrosis Ireland, a body that represents the interests of those with the life-threatening lung disease.

Patients taking the therapy saw an average 3.7 per cent increase in lung function in the tests run by the UK Cystic Fibrosis Gene Therapy Consortium.

“Any increase in lung function would be considered an advance,” said Katie Murphy, research and development officer with CF Ireland.

CF patients can experience a 2 per cent drop per year in lung function as the disease progresses, she said.

“To see a 3.7 per cent increase in lung function is considered a promising finding,” she said.

CF is an inherited chronic disease that mainly affects the lungs and digestive system. There are about 1,200 CF patients in Ireland and 70,000 worldwide, CF Ireland says.