Count on it: Maths Week adds up to money well spent 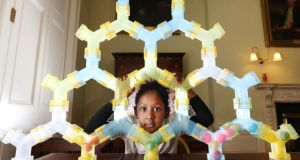 With the new school year beginning, teachers are looking for opportunities to enrich the education of their pupils. Next month the eighth annual Maths Week will take place throughout Ireland. It will open with “Maths in the City” in Dublin on October 12th and continue until the 20th with “Gathering for Gardner: Celebration of Mind”.

This latter event recognises the marvellous work of the late Martin Gardner, who, through his books and his column in Scientific American, did more than anyone to popularise maths and enhance public awareness and understanding of it.

Maths Week was started in 2006 on the initiative of Eoin Gill of Waterford IT. It has grown with breathtaking speed to become the most successful event of its kind in the world. All the third-level educational institutes in Ireland, north and south, are partners. And Maths Week is supported by a large number of learned bodies, research institutes, museums, heritage centres and technological agencies.

The background to Maths Week is the vital role that maths plays in modern life and the pressing need to help young people to become more numerate and comfortable with mathematics. Many people find mathematics difficult, and attitudes towards it are often negative. The central message of Maths Week is that this vast subject is interesting and rewarding and can be great fun.

During the week there will be a wide variety of events for students of all ages. Hamilton Day, which commemorates the discovery of quaternions by William Rowan Hamilton, is on the Wednesday, and distinguished mathematical physicist Sir Roger Penrose will present the Royal Irish Academy Hamilton Lecture at TCD. The annual Hamilton Walk, organised by NUI Maynooth, will visit the site of the great man’s discovery on the same day.

School teachers and college lecturers volunteer time and expertise to organise and present events during the week. Moreover, professional presenters give lectures, run workshops and manage fun events that are invariably “sell-outs”. This year, the leading US maths populariser, Stanford University’s Prof Keith Devlin, and Dr James Grime of the Millennium Mathematics Project at Cambridge University will give lectures. Book early.

Much has been written about the crisis in mathematical education at all levels. Leaders in business and industry are sharply aware of the economic urgency of raising standards.

Private firms and commercial concerns provide funding for the initiative but most of the financial support comes from public funds in the North and Republic.

Let’s hope the two governments continue to recognise the high level of voluntary participation and involvement by lecturers and teachers, and the enormous benefits of Maths Week. Taxpayers’ money supporting this event is money well spent.