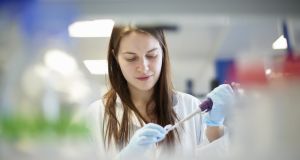 The Departments of Jobs and of Education have both receive additional money to spend on scientific and humanities research.

The Jobs allocation will see Science Foundation Ireland receive a 3.5 per cent increase to €162.5 million, and Enterprise Ireland will have €122 million to invest in research supports, up 3.7 per cent.

Under the Education estimates, the Irish Research Council will receive an, as yet unspecified, amount of money to start up a new blue skies research programme.

Other increases for research included a €1 million, or 28 per cent, increase in the Tyndall National Institute – bringing its budget to €4.5 million.

A 37 per cent increase in the Programme for Research in Third Level Institutions budget brings its spend during 2017 to €14.2 million.

The Council welcomed the funding which will allow it to open up a new frontiers research programme. It will also have funds for an initiative to attract scientists from Britain who are affected by Brexit.

The frontiers programme would help scientists here to be more competitive internationally and support the next generation of scientists, said Council director Dr Eucharia Meehan.

The additional funding going into higher education was “wholly inadequate” said Joanne Irwin, president of the Teachers’ Union of Ireland.

The cutbacks during austerity had been “extremely damaging” and it was “regrettable in the extreme” that more wasn’t done to reverse this, she said.