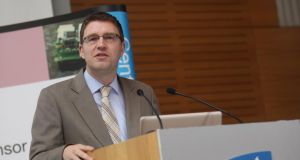 A scientist working in information technology and big data has been named the Science Foundation Ireland Researcher of the Year 2014.

Prof Barry Smyth was declared the winner by Minister of State for Skills, Research and Innovation Damien English last night at the two-day SFI Science Summit in Athlone.

Prof Smyth has published more than 400 scientific papers and also has a strong track record of translating research discoveries into products and services, Mr English told the meeting.

Mr English also announced that Pfizer-based scientist Dr Anthony Maher won the foundation’s Research Image of the Year competition with a striking image of a single drug crystal shape-shifting into a different form.

a co-founder of ChangingWorlds, acquired by Amdocs Inc; and chief scientist and co-founder of Irish search analytics company HeyStaks.

He was a driving force behind the foundation’s Insight research centre, which focuses on data analytics and the ability to extract useful information from big data, Mr English said. Prof Smyth also exemplified the theme of the 2014 summit, “Illustrating impact”, said the Minister.

The scientist was helping to put Ireland at the forefront of data analytics and the sensor web revolution, said foundation director general Prof Mark Ferguson.

Prof Smyth expressed his delight at winning the award, saying it had been an exciting journey given he was able to combine his research interests with commercial opportunities. He celebrated the work and contribution made by students and collaborators working with him.