Maria Louise Fufezan and Diana Bura of Loreto Secondary School have won the top prize at the BT Young Scientist and Technology Exhibition for their project looking at the damage being done to soil fertility by animal feeds. 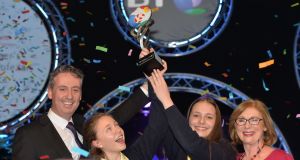 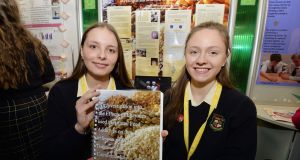 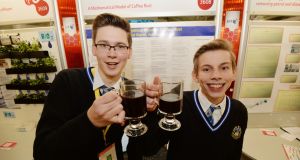 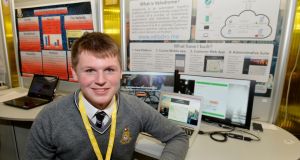 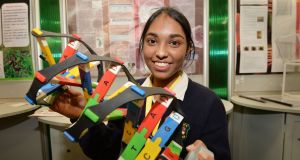 Two students from Balbriggan have captured the top prize in the BT Young Scientist and Technology Exhibition at the RDS.

Maria Louise Fufezan and Diana Bura of Loreto Secondary School have been declared the BT Young Scientists 2016 for their project looking at the damage being done to soil fertility by animal feeds.

The best individual award went to Shane Curran of Terenure College for his development of a computer programme that controls a courier service.

The runner-up group prize went to Gabriel Barat and Adrian Wolniak of Synge Street CBS, Dublin, for their computer model that tracks a coffee plant disease.

Renuka Chintapalli also of Loreto Secondary School in Balbriggan claimed the runner-up individual prize for her discovery of a possible early warning of when an oesophageal cancer is about to spread.

This may be the first time that all four top prizes at the young scientist went to students attending schools in greater Dublin. It is also a rare thing for a single school to claim two of the top four prizes.

Maria Louise (16) and Diana (15) are transition-year students and both were entering the exhibition for the first time.

The idea for the project arose when Diana visited her grandmother’s farm and noticed the chickens there were much smaller than commercial birds so the two girls decided to find out why.

They discovered the cause was a food additive included in commercial feed that enhances animal growth, but they also learned that the enzyme included as a growth additive had the capacity to damage tiny worms or nematodes that live in and help fertilise soils.

They embarked on a highly detailed and thorough examination of the impact of the food additive on the nematodes. They found the enzyme had a range of effects including taking away its escape response to noxious substances and reducing the worm’s ability to search for and find food.

These nematodes are tiny, with more than five million found in a cubic metre of soil, the girls explain. This makes them an important contributor to soil fertility and they suggest that feed producers should stop using the enzyme to avoid the risk of long-term damage to soils.

The two receive a cheque for €5,000 and the BT Young Scientist perpetual trophy. They will also have an opportunity to represent Ireland at the 28th EU Competition for Young Scientists in Brussels.

Transition-year student Shane undertook a major software development project to create a system to control courier deliveries. Called Velodrome it automates everything from pick-up and dispatch to delivery and billing.

He got the idea when trying to deliver a parcel in Dublin and had to choose between delivering it himself or sending it in a taxi.The 15-year-old third year at Terenure College, Dublin decided to develop a way to simplify this chore.

It was an 18-month project but Velodrome is now ready and could go into immediate use with any of the courier and logistics companies working here.

He plans to study information technology when he graduates and also plans to keep participating in the young scientist competition.

“I will keep coming back until I am not allowed to any more,” he said.

He receives a cheque for €2,400 and a BT perpetual trophy.

Gabriel and Adrian developed a powerful computer model that allows them to take a green approach to controlling a disease common in coffee. Effectively they are using mathematics rather than chemical sprays to help control coffee rust fungus, a disease that is endemic in Central America and can spread readily.

It is a complex disease however that involves not one organism but four interacting together, and the balance between them dictates the impact of the rust on coffee plants.

There is an existing mathematical model used to control coffee rust but it only takes into account two of these four organisms which include the rust fungus, white halo fungus, green coffee scale and a species of ant.

They receive a cheque for €1,200 and a BT perpetual trophy.

Second-placed individual, Renuka, is a fifth-year student in Balbriggan. She made medical discoveries related to oesophageal cancer that look likely to be published in an international journal.

She tapped into the wealth of biochemical data available online in the hunt for a biomarker that could warn when an existing oesophageal cancer might spread.

Bioinformatics has become an important method for studying the processes within cells and about 90 per cent of the project related to this kind of data mining, she said.

Her search identified a protein called filamin C that was only present when a cancer was about to spread. She believes that this could serve as a biomarker.

She has linked up with a professor at Trinity College Dublin to prepare a paper that they hope will be published soon.

Renuka receives a cheque for €1,200 and a BT perpetual trophy.

The BT Young Scientist and Technology Exhibition remains open to the public until Saturday afternoon. Visitors will be able to meet the top four prize winners and visit the 550 stands at the RDS. The exhibition closes at 5.30pm.

Tickets are available at the door and cost €6 for students, €12 for adults and €25 for family tickets.