Most accurate measure shows expansion clocked at 68km per second 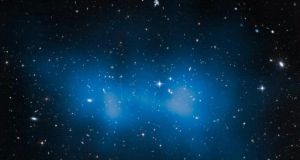 The largest known galaxy cluster in the distant universe, catalogued as ACT-CL J0102-4915, nicknamed ‘El Gordo’ (Spanish for “the fat one”). Photograph: EPA/NASA

Scientists have used an advanced speed camera to clock how fast the universe was expanding when it was a quarter of its current age. Back then, it was inflating at a rate of 68km per second and today things are moving even faster.

Spacetime is expanding in all directions, rushing away at a blinding pace, something confirmed in the 1930s by US astronomer Edwin Hubble. So important was the finding that the famous space telescope currently in Earth’s orbit was named in his honour.

Hubble’s Law describes how the farther apart two objects are in space, the faster they are accelerating away from one another. This sounds confusing but may help to explain why so many feel we are moving as quick as we can but getting nowhere fast.

Astronomers have been studying expansion speed since Hubble, and being able to measure it is central to our understanding of the universe. That is why this new, more accurate rate is important. The research team from the US, Switzerland and France presented their findings yesterday afternoon at the April meeting of the American Physical Society in Savannah, Georgia.

Crunched galaxies
In a seriously hard slog, the researchers studied the light coming from 140,000 distant quasars – crunched galaxies that are exceptionally bright and look like individual stars. “We have measured the expansion rate in the young universe with an unprecedented precision of 2 per cent,” said Prof Timothee Delubac of the Centre de Saclay in France.

“If we look back to the universe when galaxies were three times closer together than they are today, we would see that a pair of galaxies separated by a million light years would be drifting apart at a speed of 68km per second as the universe expands,” said Prof Andreu Font-Ribera of the Lawrence Berkeley National Laboratory in the US.

Those quasars are moving even faster today, given expansion speeds up the greater the distance between them. But what is pushing them along?

Astronomers have dubbed it “dark energy”. They have no idea what it is but have calculated it makes up more than 68 per cent of the universe. All the stuff we can see like quasars and stars only accounts for 4.9 per cent of the pie.