Access Science: Wind turbines pose a threat to the birds of Ireland

Swans, golden plovers, hen harriers and geese among species most affected by turbines 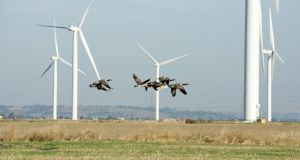 Geese: one type of bird most affected by turbines. Photograph: Johnny Greig

What do swans, golden plovers, hen harriers and geese have in common? Aside from being able to fly, they are all to be found on a list of the 22 bird species most affected by the positioning of wind turbines.

Sometimes it is a flight risk, for example with swans that often fly at a height that leaves them at risk of the whirring blades.

For others, the turbines represent a hazard to habitat, closing off space that previously would have been ideal for nesting.

It is a real challenge to find a way around this problem, says Dr Shane McGuinness, a member of the policy and advocacy team at BirdWatch Ireland. “Ireland must adhere to the Birds and Habitats Directive, which protects bird habitats but also has international obligations to fight climate change,” he says.

Ireland has already been in trouble over failing to adhere to the directive and the regulations that followed, he says.

With this in mind, he and others in BirdWatch Ireland have developed a mapping tool, Bird Sensitivity to Wind Energy Development. It takes the uncertainty out of choosing locations for turbines and identifying areas that would be particularly damaging for bird life.

“There are about 200 species here, and we assessed these, looking at their present distribution, conservation concerns and whether we had enough data on our most endangered species,” he says.

“It is important to note these 22 [species] are the most sensitive to wind-turbine development. The most at risk is the red-throated diver, a niche species found in a few isolated lakes in Co Donegal,” he says. The sandwich tern and the golden plover come second and third in the list.

“It is a pre-planning tool. It is not intended to create no-go areas in wind energy and it does not include all vulnerable species or replace the normal environmental impact assessments.”

But it does reduce uncertainty when assessing the likely impact of wind turbines on bird species, he believes. It has been well-received by companies involved in wind energy. The tool has been presented to 27 of the 31 local authorities here, he says.

QUESTION CORNER: Does gravity’s pull balance out on the way to the moon?