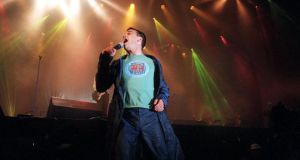 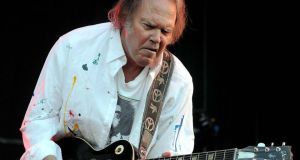 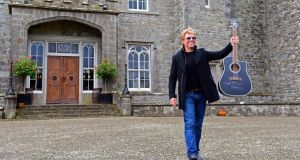 Like buses, you wait all year for a big music show and then three come along at once.

The stadium arena tour circuit begins tonight when Robbie Williams opens his Take the Crown UK and Ireland arena tour with a show in the Aviva Stadium. It will be followed tomorrow by old warhorses Bon Jovi and Neil Young.

It’s a major undertaking for Williams who has only played six dates, all indoors, in support of his studio album Take the Crown.

It is his first solo arena tour since 2006 which was troubled by a bout of stage fright and led to the cancellation of a leg of the tour.

In an interview with The Irish Times three years ago, he traced his stage fright back to an uncharacteristically subdued performance in front of 78,000 fans at Croke Park in June 2006.

“I felt shocking, and I thought that, if I feel shocking, surely it is coming out to the audience. I know what it is now, but it was terrifying at the time,” he said.

“I had something that made me lethargic; the thought of getting up in front of 75,000 fans petrified me. It was nothing life-threatening but enough to put me on my arse. I had stage fright. It is sorted now.”

He made good his pledge to make up for that ill-fated show by playing a concert at the O2 last year in aid of UNICEF and Childline.

He is clearly in a better place now judging by his pronouncements about his domestic bliss. He will be supported by Olly Murs, one of the few singers who has managed to sustain a credible career from reality television shows.

Tonight’s concert will have a capacity of 50,000 and promoter Denis Desmond says it is sold out as is next week’s Aviva Stadium concert featuring Rihanna.

Slane Castle owner Lord Henry Mountcharles is expecting a crowd of “50,000+” for tomorrow’s Bon Jovi concert which will have all-Irish supporting cast from The Coronas, Bressie and Ham Sandwich.

“Let’s jus say Denis Desmond and I are pretty relaxed about it at this stage,” he said.

The show will have a capacity for 55,000 because there were will be seating capacity for thousands of fans. “It’s a slightly older demographic,” said Lord Henry, “the last time we did it was for The Rolling Stones.”

At the age of 67, Young exhibits no signs of running out of ideas. His latest album Psychedelic Pill clocks in at 87 minutes and includes one song “Drifting Back” which is 27 minutes long.

Peter Aiken of Aiken Promotions said he is anticipating a crowd of between 22,000 and 26,000 for Young.

“We’re very pleased. He always does well for us,” he said. Aiken Promotions big concerts of the year are Bruce Springsteen’s provincial Irish shows in Limerick, Cork, Kilkenny and Belfast. Some 145,000 tickets have been sold for them while the Cork Marquee gigs have sold 75,000 to date.

It looks like being dry for tonight’s show at the Aviva Stadium. Tomorrow will be typical Irish summer weather with sunshine and showers forecast and average temperatures in the mid-teens.