Reforms can 'cut suicide rates by 30%' 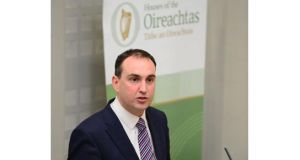 Fianna Fáil has set out a range of proposals that it says, if implemented, could help to reduce the number of suicides recorded in the State by 30 per cent in a 10 year period.

The document proposes the establishment of out-of-hours social work teams to provide help to people in distress, wider availability of guidance counsellor services in schools and the provision of counselling services to people in mortgage distress.

It also says that the National Office for Suicide Prevention should be restructured and reformed and given a ring-fenced budget to support its activities, GPs should be resourced to provide help to people at risk of dying by suicide and that the should be implored to take a more responsible role in covering the subject.

Figures from the Central Statistics Office show that some 525 suicides were registered in the State in 2011. A total of 439 men and 86 women were recorded as having taken their own lives, the majority of whom were aged 15-44.

Fianna Fáil’s Seanad health spokesman Senator Marc McSharry said, to put it bluntly, the State was facing a public health emergency when it came to suicide.

Mr McSharry, who wrote the report titled Actions Speak Louder than Words: A Structural Approach to Societal Issue, said that for years politicians had attempted to come up with ways to address the issue, but that it was now time to provide experts in the field with the resources to address the growing issue.

“The legislature must provide the correct structure and resources to those engaged in suicide prevention if they are to succeed in peeling back the blindfold on the phenomenon of loss of life through suicide in our society,” he said.

Fianna Fáil said the suicide prevention proposals outlined in the document would cost some €85.6 million to implement annually.

Mr McSharry said that, given the role alcohol played in suicide, the costs could be covered by the introduction of a 7.5 per cent levy on off-licence sales that would generate €120 million a year.

He said he believed people would be happy to pay the levy if they knew it would help to fund suicide prevention services.

The State is to spend some €733 million on on mental health services in 2013, some €8.1 million of which has been allocated to the National Suicide Prevention Office.