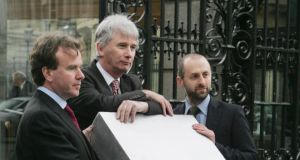 John Devitt of Transparency International Ireland (right) said the publication of a Bill to protect whistleblowers was an important step in the fight against corruption. Photograph: Cyril Byrne/The Irish Times

The publication of a Bill to protect whistleblowers has been welcomed by Transparency International, which described it as an important step in the fight against corruption.

The Bill provides for a legislative framework for the protection of whistleblowers in all sectors of the economy.

“Workers can now raise concerns regarding potential wrongdoing that has come to their attention in the workplace in the knowledge that they can avail of significant employment and other protections if they are penalised by their employer or suffer any detriment for doing so,” he said.

“The publication of the Protected Disclosure Bill and its planned enactment in the autumn should instil all workers with confidence that should they ever need to take that decisive step and speak-up on concerns that they have about possible misconduct in the workplace, they will find that society values their actions as entirely legitimate, appropriate and in the public interest.”

Provisions of the Bill

- Where a whistleblower or a member of his or her family are coerced, intimidated, harassed, discriminated against or otherwise adversely treated the legislation provides for a right of action in tort

- The safeguards apply to contractors, agency staff and trainees as well as employees

- Special arrangements will apply to disclosures relating to law enforcement matters and to disclosures that could adversely affect Ireland’s security, defence or international relations

John Devitt, of anti-corruption agency Transparency International Ireland, welcomed the Bill, saying that it was high time that whistleblowers enjoyed the protection of the law for acting in the public interest.

“This could be a very important step both in fighting corruption and promoting higher ethical standards in business and in the public service,” he said. “The Bill should help create an environment in which workers in most categories can speak up without undue fear of retaliation.”

He also welcomed the protection afforded to contractors, trainees and agency staff and the provision that all staff would be protected from their first day in employment:

“We know from experience a s well that new employees are more likely to report wrongdoing...This legislation will afford them safeguards from day one.”

One4all customers leave €219m unused on cards 13:38
All nursing home residents to get first vaccination jab by next Sunday – Minister for Health 13:30
Alexei Navalny to fly into Moscow in challenge to Putin 13:09
Call records reveal fear and anxiety of older people during Level 5 12:46
Britain calls for concerns over Ugandan election to be investigated 11:55