Close to 75,000 music fans set to attend 17 concerts at venue in June and July 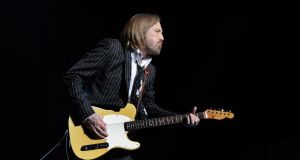 Tom Petty and The Heartbreakers at the start of their European tour at the O2 last year. Photograph: Brenda Fitzsimons/The Irish Times

Nearly 750,000 people have attended almost 200 concerts at the Cork venue.

“We hope to have an album out next year for the 10th anniversary - a classic album with 20 to 24 tracks - picking the songs is going to be problem because we’ve had so many great performances here over the years - Roger Waters, Neil Young, Tom Petty, ” he said.

“We’d have to limit it to one track per artist because we’ve had so many big names here - Bob Dylan, Elton John, Rod Stewart, Brian Wilson, Status Quo, Robert Plant, Al Green, Paul. Simon, The Who, Paul Weller, Diana Ross - the list is almost endless.”

Among the candidates for inclusion from this year’s line-up are Sting and Elvis Costello, who are both appearing at Live in the Marquee for the first time, and The Boomtown Rats whose gig on July 5th will mark the band’s first performance in Ireland in over a quarter century.

“I never expected when we ran the first one in 2005 that it was going to be such a success but I remember meeting people after the Brian Wilson concert and they liked the fact that it was relaxed and wasn’t an arena and they could wander out for a beer and back in for the band,” Mr Aiken said.

“And it’s continued to grow to the point that people know about it across the island - it’s no longer Live in the Marquee in Cork, it’s just Live in the Marquee - we have a record shop in Belfast after hiring a 40-seater bus to bring down fans to see ZZ Tops for example.”

This year’s Live in the Marquee series kicks off tomorrow with Olly Murs and continues later this week with Little Mix.

The summer line-up also includes The Wanted and The National as well as The Coronas who play two concerts at the Cork venue.