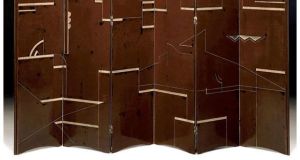 An Eileen Gray-made wooden screen, used as an apartment room divider, sold at auction in New York for more than $1.8 million last September.

The following is the full text of the speech delivered by President Michael D Higgins at the opening of an exhibition of the work of Irish architect and designer Eileen Gray at the Irish embassy in Paris.

Together with Sabina, it gives me great pleasure to welcome you to the Embassy of Ireland in Paris to mark the opening of the three-month Retrospective Exhibition of the work of Eileen Gray at the Centre Pompidou.

Thank you, Minister Filippetti, for all the support that you and the French government have extended to this remarkable initiative, and we are honoured by your presence this evening. I greatly enjoyed the opportunity that we had earlier this evening to view together the magnificent and evocative exhibits.

I wish also to thank Minister Cazeneuve and Minister Conway-Mouret for your presence and for your support.

Through you, President Seban, let me congratulate the entire community at Beaubourg for your imaginative programming of this Retrospective as well as for the superb standard of curatorship that the entire world associates with one of its leading cultural institutions. Little wonder that half a million visitors are expected to view the exhibition in the coming three months.

It is pleasing that this Eileen Gray Retrospective is at the very centre of the Europe-wide Cultural Programme that the Irish Government and cultural institutions – including the Irish Cultural Centre here in Paris – have put in place to mark Ireland’s current Presidency of the Council of the European Union.

The very apt title of this Presidency programme is “Culture Connects”.

In particular, I want to commend the excellent support that Culture Ireland has extended to the exhibition and the partnership it has built with the Centre Pompidou. The National Museum of Ireland and the Irish Museum of Modern Art are also among the institutions which have collaborated in the endeavour. It is my fervent hope that these connections will deepen and grow in the months and years ahead.

There is already a rich tradition of cultural cooperation between Ireland and France. For my own part, I have the warmest personal recollections of the year-long festival “Imaginaire Irlandais” that represented a kind of Année d’Irlande here in France in the mid-1990s, at a time when I served as Ireland’s first Government Minister for Arts, Culture and the Gaeltacht. That collaboration had the enthusiastic support of presidents Mitterand and Robinson and I am happy to say that many fruitful exchanges flowed from it.

There is a venerable and renowned tradition - that of individual Irish artists coming to France, to Paris and finding here the freedom, encouragement and ultimately the recognition that inspires and sustains the artist’s acts of creation.

It is a tradition that is alive and well. In this connection, I look forward to visiting this week the Irish artists in residence at the Irish Cultural Centre. Alongside Joyce, Wilde and Beckett, Eileen Gray is to the very fore of those Irish creative artists who in the twentieth century supped at, whilst also replenishing the well of genius in the Paris of their time. Nietzsche had said just a little while before that:“as an artist, one has no home in Europe, but in Paris”.

And if Beckett was later to drive an Irish Red Cross ambulance in St Lô in Normandy immediately after World War II – having been a Résistant during the conflict – then let us remember too that the dashing Eileen Gray, as well as flying airplanes, drove an ambulance in France during World War I.

Eileen Gray when she first arrived in Paris in 1902 at the age of 23 had not explored the medium of laquerwork that she was to embrace with enthusiasm and that was to make her strong contemporary reputation as a furniture designer of the Art Déco movement and the Avant Garde.

It was only in the 1920s that, as a self-taught architect, she became a leading, and early exponent of Modernism. She uncovered and manifested her genius gradually, emerging into it over time. Her spirit of independence, of difference and above all of integrity shines through the story of her life and her artistic journey. Those living on the

Rue Bonaparte had a special neighbour for almost seventy years.

One commentator has suggested that

“Modernists of all stripes shared two defining attributes: first, the lure of heresy that impelled their actions as they confronted conventional sensibilities; and secondly, a commitment to principled self-scrutiny.

The one thing that all Modernists had indisputably in common was the conviction that the untried is superior to the familiar, the rare to the ordinary, the experimental to the routine. ‘Make it New!’ boomed

Ezra Pound. And the principled self-scrutiny had far deeper roots than just unconventionality”.

We can recognise Eileen Gray in this, just as we can perhaps connect her work with a poem by Arthur Rimbaud, a novel by James Joyce, a painting by Pablo Picasso, a piano piece by Eric Satie, a play by Samuel Beckett, or a choreography by Serge Diaghilev. “Astonish me!” - the call of the great Russian - could be a plausible watchword for the entire troupe, Parisians all. It might also reflect somewhat the esprit of their contemporary, Oscar Wilde, the great Dubliner, who rests amongst you at Père Lachaise. They heralded the advent of the twentieth century and cleared an ascent to many of its highest peaks.

Another Irish modernist, Peter Rice from Dundalk, followed in their footsteps. As a pioneering structural engineer Rice established a base here in Paris and his groundbreaking work with materials of all kinds forms the foundation for the Pompidou Centre, I.M. Pei’s pyramids at the entrance to the Louvre, the Cite des Sciences et d’Industrie in the 19th arrondissement and the TGV stations in Lille and Roissy.

It is sad to reflect that for much of her life, the work of Eileen Gray was not accorded the recognition that it clearly merited and that latterly, and happily it now enjoys. In this regard, among those deserving acknowledgement for having done the right thing before it became fashionable to do so were writers and friends of hers such as Peter Adam, who I am so pleased to see here this evening. He was not alone and one thinks of Colette, Jacques Doucet and Yves St. Laurent – as well as Pierre Bergé who too is most welcome here in this house. But they were not a majority.

In her native land, for decades they were few in number who publicly celebrated Eileen Gray and her work. One imagines that this was for a variety of reasons, not all of them innocent. The State itself also was short of the mark. And yet the Royal Institute of Architects in Ireland presented an exhibition of her work in Dublin in 1973, with the support of the Bank of Ireland and the citation of Robin Walker at the time was fittingly elegant.

Today we in Ireland are justly proud of Eileen Gray and her immense impact on the world of design and architecture. It is moving for example to see the tributes paid to her memory by students at the Irish language school, Meánscoil Ghearman, that is now located in Brownswood House, her childhood family home near Enniscorthy,

County Wexford. The National Museum in Dublin houses a permanent collection of her work. We have been enthusiastic supporters and partners of France and the Centre Pompidou these very days.

You will be pleased, I am sure to learn that the Irish Cultural Centre in Paris, under the talented leadership of my friend, Sheila Pratschke, is organising – again in the framework of Ireland’s Presidency of the European Union – a number of exhibitions and events which illustrate well how the artistic influence of Eileen Gray has found a strong echo in contemporary Ireland. Let me mention two in particular:

First, there is an exhibition on the late Peter Rice of Dundalk – who was a consultant engineer on the construction not only of the Roof of the Sydney Opera House, but also on the construction of the Louvre Pyramid and of the Centre Pompidou itself; and

Secondly, an exhibition of furniture designed by Susan Zelouf and Michael Bell. You may have noticed their screen and table in the entrance to the Embassy this evening. I suspect that Eileen would have paused there, had she been joining us this evening.

It is equally gratifying that the local authorities in Roquebrune Cap Martin are generously overseeing the restoration of Eileen Gray’s architectural chef d’oeuvre, the magnificent modernist dwelling E 1027 which she conceived together with Jean Badovici of Romania and built in the period 1926 -1929. This is a true work of genius and talk about being ‘before one’s time….’!

I would like to express hope and confidence, Madame Minister, that the integrity of the Gray design will be the centre of the public presentation of the restored E 1027 – house and plot intertwined – and that it will be a basis and a locale for Franco-Irish cultural cooperation for decades to come.

I’d also like to mention this beautiful publication from the Crafts Council of Ireland, a copy of which is being made available by the Embassy to each of you. This

‘Critical Selection’ publication presents the work of 26 of Ireland’s most accomplished craft workers, among them Deirdre McLoughlin, whose work is on exhibition in the Centre Culturel Irlandais until Feb 22nd.

In closing I would like on behalf of all of us to thank you, Ambassador and Rosemary as well as your dedicated colleagues, for your hospitality this evening. And in closing let me once again congratulate all those – not excluding the Embassy itself – who are responsible for bringing this remarkable project to fruition at the Luminous Centre Pompidou.

May the rightful place of Eileen Gray – a great Irishwoman of France and a truly seminal world designer and architect – be forever assured.