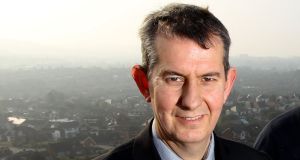 A “forgetful” Edwin Poots made few friends on Twitter this afternoon.

A Twitter storm in a teacup has erupted this afternoon after Northern Ireland’s health minister Edwin Poots posted a trolling tweet which casted aspersion on today’s celebrations to mark the 97th anniversary of the Easter Rising.

“Had forgotten it is the 97th anniversary of a failed rising by subversives,” the DUP MLA said and watched on as a deluge of criticism swamped his timeline.

"I was brought up in the Protestant faith yet find that language unnecessarily inflammatory," said a Twitter user called Brian Adam Fraser adding that Poots' post was "excruciating from a politician!"

Other users of the site were less kind.

Paul Moloney suggested that it was "hard to take seriously a man who thinks the universe is 6000 years old" referring to Mr Poots’ creationist views. A Conor McGuigan, meanwhile, suggested that the tweet proved that "DUP politicians are more interested in trolling than doing/saying anything constructive".

And a Matthew Carson said he was "convinced there’s a bet on within the Assembly as to who can be the most detestable member” adding that “ Edwin Poots is in it to win it".

Aaron Litvinoff suggested Mr Poots "grow up" and called the leading Unionist politician a "backwards idiot" before concluding his tweet with: "So much for a shared future and respecting other people's culture eh?"

Hours after his inflammatory tweet, responses were coming in at more than one a minute. Mr Poots was, however, unrepentant. “It would appear some nameless cyber warriors are a little touchy today,” was his sole response to the criticism.

The vast majority of those who had responded to his comments had names and identifying pictures to accompany their tweets however, suggesting that Mr Poots has as poor an understanding of Twitter as he does history.

Court protection petition for chocolate company prepared ‘in secret’ 20:11
Tánaiste says third short period of Covid-19 restrictions may be needed in New Year 20:08
Brexit: Rush for last-minute deal to let sausages into North 20:07
Digital bank N26 targets one million customers in the Republic 20:04
Fines of up to €500 introduced for breaches of Covid-19 regulations 20:04