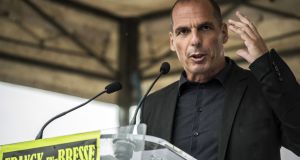 Brendan Ogle, of the Right2Change movement, which grew from the Right2Water protests, has called for the election of a progressive government of the left. Sinn Féin and People Before Profit are among the groups and parties that have subscribed to the Right2Change principles.

Mr Ogle said the group would hold a rally in Dublin’s Mansion House on Saturday, and stage a protest the weekend before the election. Mr Varoufakis would be addressing Saturday’s meeting by video link, and would travel to Ireland before polling day.