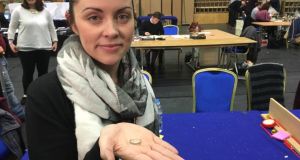 Count centre staff in Wicklow were searching for votes - and an Arklow woman’s ring, after it fell into a ballot box on Friday.

The voter’s silver eternity ring slipped off her finger as she cast her vote at Templerainey National School on Friday evening.

“She put her finger in the box and then turned to her husband and said, ‘oh my ring’,” said Jacqueline Donnelly, the presiding officer at the school.

“Her husband said it was probably in the box. Then she turned to us, we looked in the box, moved it around, but we couldn’t see it and there was not way of getting it out at that stage.”

At the Wicklow count centre in Greystones on Saturday, staff were on high alert for the diamond-studded ring.

As luck would have it, Ms Donnelly’s brother Paul opened the ballot boxes for the Arklow area and spotted something glistening among the papers.

“We’re going to phone her now and tell her the good news,” Ms Donnelly said. “ She was a bit embarrassed at the time. It was that irish thing of, ‘it’s ok, it’s ok’. But we took her number.

“We’re happy to help - and It proves that the ballot boxes haven’t been tampered with.”