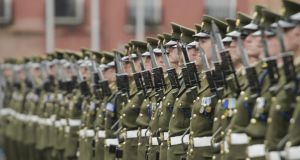 Members of the Defence Forces form a Guard of Honour at the State Ceremony to mark the Centenary of the founding of the Irish Volunteers in 2013. File photograph: Alan Betson / The Irish Times

Defence Forces personnel will work with the 18-24-year-olds “who might otherwise struggle to break out of cycles of disadvantage”, according to Minister for Defence Simon Coveney. A pilot scheme will run in 2016.

An Institute for Peace Support and Leadership training, with a focus on international education in the field of peacekeeping and conflict resolution, is also proposed.

“We have looked at international best practice to learn what might work in Ireland and I look forward to exploring this concept,” Mr Coveney said.

The number of women in the Defence Forces would double under the plan.

New equipment will be provided to the Army, Navy and Air Corps. Regular reviews of defence requirements are also proposed.

Mr Coveney referred to the “increasingly complex nature of security threats in the world today”. He said the White Paper would promote “Ireland’s values in the world” while protecting Irish interests.

He said the Defence Forces and Civil Defence were an integral part of the State’s response to major emergencies and natural disasters.

“The White Paper on Defence reflects the important role of defence as part of the State’s security framework...It provides clear direction and a pragmatic approach to defence and to ensuring that we can continue to reflect with pride on the service provided by the Defence Forces to the security of the State.”

The Minister said the Government had sought the views of a wide range of “stakeholders” and an extensive consultative process had shaped the policy decisions contained in the paper.

Speaking to RTE’s Morning Ireland on Wednesday, Mr Coveney said Ireland had been under-investing in defence for quite some time.

He said women were being encouraged to sign up to the Defence Forces.

More women were needed in the Defence Forces to ensure the successful implementation of plans to tackle gender based violence around the world.

Mr Coveney said the new plan was about “trying to ensure that as a sovereign, proud, independent country...Ireland is a country that takes seriously its own defence and its role internationally”.