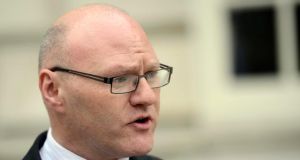 Sinn Féin’s Paul Maskey recorded an expected landslide victory in West Belfast to claim the party’s only MP seat in the city.

Although the result was never really in question, the biggest challenge for Sinn Féin was attempting to encourage a large turnout among the area’s sizeable nationalist community in anticipation of assembly elections next year.

That target was achieved with a total poll of 35,610, a two per cent increase on 2010 figures and substantially higher than the numbers recorded in a by-election the following year.

Of that, 19,163 voted for Mr Maskey, making him the runaway winner. It means the former MLA will continue to occupy the position vacated by party leader Gerry Adams in 2011 after his defection to southern politics, but Mr Maskey will not sit at Westminster due to Sinn Féin’s ongoing abstentionist policy.

In his victory speech, he vowed to fight the proposed welfare cuts which have proven such a divisive issue in the Stormont executive over recent months, and promised to keep “wrapping on 10 Downing Street’s door” on the issue.

Elsewhere, members of Northern Ireland’s People Before Profit Alliance will have taken great solace from the performance of West Belfast candidate Gerry Carroll, who came a clear second with 6,798 votes.

The result will no doubt encourage the anti-austerity campaigner’s prospective bid to annex an assembly seat for the area next year.