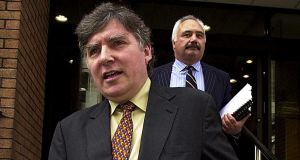 John Rodgers: told Mr Dukes he did not see the legal basis on which access to the files, especially for films made 30 years or more previously, could be resisted or refused. Photograph: David Sleator

There was a series of tense letters between the attorney general and the minister for justice in late 1986 over the release of the film censor’s files to an academic, documents from the State papers show.

On September 4th, Kevin Rockett, then academic and chairman of the Irish Film Institute, wrote to attorney general John Rogers to say he had been refused access to the film censor’s files, even for films of the 1920s, by then minister for justice Alan Dukes.

He said the basis for refusal was “the confidential contractual relationship between the film censor and the film distributors”. He asked Rogers to seek “a modification” of the “blanket refusal”.

Rogers wrote to Dukes on September 16th and said he found the refusal “very difficult to understand”. He did not see the legal basis on which access to the files, especially for films made 30 years or more previously, could be resisted or refused.

A month later, Dukes responded that over the years, censors and ministers for justice “had always considered themselves precluded”, on the basis of breach of confidence, from disclosure of information on films.

Rockett told The Irish Times that “after a long and frustrating campaign” he eventually convinced the Official Film Censor in 1998 to transfer the more than 100 volumes of film censorship material to the National Archives.

Rockett wrote “Irish Film Censorship: A Cultural Journey from Silent Cinema to Internet Pornography” in 2004, with the help of those files.