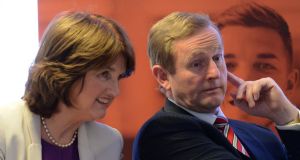 Taoiseach Enda Kenny and Tánaiste Joan Burton: much of the six hours on Monday was taken up with general discussions, a form of familiarisation for both leaders

Tracking the progress of the negotiations between Taoiseach Enda Kenny and Tánaiste Joan Burton this week has been a little like reading the text of Waiting for Godot . . . over and over again.

What was supposed to have been a short, sharp and focused exercise has panned out into a bit of a marathon.

So how did a process expected to be completed within 24 hours suddenly take a week? Especially when both sides have insisted there were no major disputes or stumbling blocks.

While some of the reasons put forward may have validity, the delays might give the impression of vacillating or drift.

While Burton and Kenny were colleagues in Government their relationship would not have had the dynamic or closeness of the Taoiseach’s relationship with her predecessor Eamon Gilmore.

Much of the six hours on Monday was taken up with more general discussions, a form of familiarisation for both leaders.

In coalition talks it is usual for the politicians in the negotiating teams to agree on broad principles, while officials from each party attend and then meet separately to go through the line-by-line detail. This process has been a little different. Labour produced a document and then both sides began drafting a joint document with the aim of setting priority policies. Given that there is only 20 months left in the Coalition’s term, it required specifics.

But the main meetings were attended by only Kenny and Burton, with no advisers present. It was only when agreement was reached that they became involved.

The process has been unusually tight and little hard information has trickled out. It is clear from conversations with them that many senior Ministers have been kept out of the loop.

What is known is that there was some wrangling over tax and which party would hold the key Jobs and Enterprise portfolio. Labour is said to have coveted this position for Alan Kelly, but the current Minister Richard Bruton and his advisers mounted a resistance campaign that seems to have saved the ministry for the party, if not for Bruton.

For some Labour TDs, who has Jobs is not vital. As its Clare deputy Michael McNamara told The Irish Times weekly political podcast: “It’s largely irrelevant who holds it, and I’m surprised so much has been made of this.

“We benefit together, and we suffer together. The public is not interested in the Labour Party differentiating itself from Fine Gael in government.”

Fine Gael is said to have sought Education as a swap for that: a Labour source said that the party saw that department as core.

Fine Gael would be keener to effect changes at the higher rate of income tax, while Labour would look to widening bands or other adjustments aimed at lower earners.

But there is not a huge ideological gulf between the parties on this. Fine Gael’s Regina Doherty told The Irish Times podcast she would support widening of tax bands and that some lower-income and middle-income families were “hanging on by their fingernails”.

It’s likely that all will be disclosed today, including the identity of the new Cabinet. By midday it should be known who are the new faces among the 15, and if the two leaders had separate second thoughts about excluding Jimmy Deenihan and Pat Rabbitte.

1 Miriam Lord: Taoiseach is trapped in a Zoom session from hell
2 All students will not return to school even if social distancing rules are relaxed – McHugh
3 Irish planning for no-deal Brexit to restart as EU-UK talks go badly
4 Covid-19: Two-week quarantine period for arrivals into State could be lifted for some
5 Maria Bailey takes action against newspaper over ‘swing gate’ coverage
Real news has value SUBSCRIBE