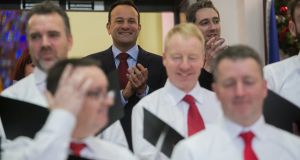 Leo Varadkar and Minister for Health Simon Harris TD during the Department of An Taoiseach’s staff choir for the annual lunchtime recital of Christmas carols at Government Buildings,Dublin. Photograph: Gareth Chaney/Collins

Taoiseach Leo Varadkar told his ministers at a private meeting yesterday that the Dáil does not have to be sitting in order for him to call an election.

Mr Varadkar outlined a number of scenarios on when the general election could be held at a meeting of Fine Gael Ministers on Thursday.

As opinion in Fine Gael grows that the Taoiseach may go to the country much earlier than expected - he has previously favoured May 2020 - ministers discussed election timing at their last Christmas meeting.

Mr Varadkar had previously stated his preference was to go to the polls in May but is said to have discussed with his colleagues the merits of calling a winter election or waiting until the summer.

He earlier this week said he would consider the issue of the election over the Christmas break, and sources said he did not come down on one side or the other at the pre-Cabinet meeting.

He pointed out the factual position that the Dáil - which will resume on January 15th following the Christmas recess - does not have to be sitting for him to seek a dissolution from President Michael D Higgins.

Mr Varadkar also, according to sources, pointed to previous Fianna Fáil taoisigh, such as Bertie Ahern, who called an election when the House was not sitting.

Brian Murphy, Mr Varadkar’s chief of staff, is understood to have pointed out that three of the last six elections were held in winter. The elections of 2016 and 2011 were held in February; 1997 was held in June; 2007 was held in May; 2002 was held in late April and the 1992 contest was held late November.

A number of Fine Gael and Government sources believe there has been a shift towards an election early next year being the preferred option.

Mr Varadkar also indicated this week that he could ask Fianna Fáil leader Micheál Martin to commit to supporting the Government on confidence motions if the pair are to agree an election timeframe.

This is because the Dáil numbers are so tight that the Government does not have a majority even if Fianna Fáil abstains under the terms of the confidence and supply agreement. It is unlikely Mr Martin would be able to commit to such a request.

A minister told The Irish Times a February election is likely “unless FF can say they will actually support” the Government in confidence motions until an agreed election date.

During an interview with political correspondents, Mr Martin argued that sustaining the Dáíl long into the New Year would be very difficult if there was no agreement between his party and Fine Gael.

He said Independent TDs would start second-guessing each other, leading to uncertainty over the Government holding firm.

“You could see Independents eyeballing each other and saying ‘who is going to jump first?’. That’s why I say it becomes untenable,” he said.

Mr Martin said a degree of uncertainty around Brexit still remained even though the Conservatives won a decisive majority in the recent general election. He said the Dáíl would not have to come back until January 31st in any instance as the UK would not be leaving the EU until then.

“Boris Johnson wants a harder Brexit than [his predecessor] Theresa May,” he said. “We are endeavouring to be a sane voice and put a bit of logic on the table . . . Should we not end this interesting chapter in an orderly way?”

He said he had previously guaranteed that as long as a threat of a no-deal Brexit loomed over Ireland there was not going to be a general election.