Varadkar says childcare costs will be considered in some insolvency deals 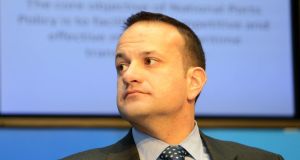 Minister for Transport, Tourism and Sport Leo Varadkar, at the launch of the National Ports Policy. Photograph: Eric Luke

Minister for Transport Leo Varadkar has said childcare costs will have to be taken into account in insolvency arrangements if the outlay is preventing parents from making mortgage repayments.

Mr Varadkar insisted nobody would be asked to give up their job under guidelines for families struggling with debt but conceded the new personal insolvency regime would examine childminding bills in cases where such costs exceeded income.

“I know one or two women . . . who probably don’t make very much money at all from working but they do it to keep their position on the career ladder, if you like,” he said.

“That’s a legitimate thing to do but if you can’t pay your mortgage as a result or you can’t buy your groceries as a result well then that’s something that needs to be taken into account in any insolvency arrangement.”

Mr Varadkar said the incoming insolvency scheme had to be fair to the approximately 90 per cent of people who were continuing to meet their mortgage debts, and stressed many were making very big sacrifices in order to pay their bills.

He said he did not know how many cases there were of a person’s childcare bills exceeding what they are earning at work.

“But I think if somebody is in that position whereby they’re actually losing money, it’s costing them money to work and as a result they can’t pay their mortgage, well then that is something that needs to be taken into account in any kind of insolvency regime.”

He was speaking at the launch of the 2013 National Ports Policy.

Earlier in the Dáil, Taoiseach Enda Kenny was asked by Independent TD John Halligan if “the family pet” would “be considered one mouth too many to feed” under the new regime. Mr Kenny reiterated that no one would have to give up work.

1 When the RIC opened fire on a crowd in Ennis during the Clare grain riots
2 Coronavirus: Almost 60 new cases recorded in Italy as two die
3 Sinn Féin to hold public meetings around country to rally support for government efforts
4 High risk of flooding along river Shannon as rainfall warning issued
5 Floods in the midlands: ‘If this was happening in Dublin it would be front-page news’
Real news has value SUBSCRIBE