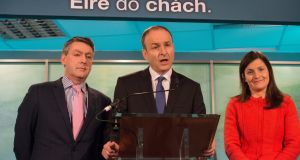 Taoiseach Enda Kenny is sending Minister for Health Leo Varadkar to fight his battles for him, Fianna Fáil leader Micheál Martin has said.

Mr Martin said the decision by Mr Kenny not to participate in an election segemnt on Wednesday evening’s Six-One programme on RTÉ was highly disrespectful.

Mr Kenny was replaced on the programme by Mr Varadkar.

Speaking at a campaign rally on Wednesday, Mr Martin said Kenny’s strategy is insulting to the Irish people.

“The ducking and diving and the hiding says to me that this is designed not to have a proper debate, not to have proper engagement with the public about the issues and it is not good enough.”

Mr Martin said every other leader was invited to appear on the TV programme but Mr Kenny was the only one who did not participate.

He said this was a deeply arrogant decision by the Taoiseach on the first day of the election campaign.

The Fianna Fáil leader said Fianna Fáil would not allow Fine Gael to have the coronation it wants.

He said Mr Kenny’s party is in panic mode and making a series of unrealistic promises.

Mr Martin said this was highlighted in the Taoiseach’s inability to explain the figures behind the party’s long-term economic plan.

“They had five budgets and all five gave priority to the wealthiest. It is Labour Ministers who recently described Fine Gael as ‘Thatcherite’ and ‘Tory’.

“This is nothing compared to what they want to do in the future.

“Just like the Tories showed a mild face in their last election but followed it with deeply unfair policies, this is what Fine Gael is offering.”

Mr Martin said the party would launch its general election manifesto next week.