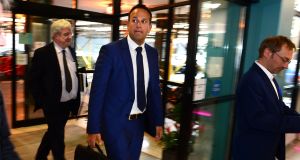 If Fine Gael did as well in a general election as the latest Irish Times/Ipsos MRBI poll suggests, it would give the party its second best result in 20 years, Minister for Health Leo Varadkar has said.

“Overall it indicates that roughly four out of five people who voted for Fine Gael in the last election are still supporting us and I think we’ve an opportunity to restore our support to what it was at the last election,” he said this morning.

“I think I’d be correct in saying if we got that result in a general election it would be our second best result for the best part of 20 years,” Mr Varadkar said.

“But we need to do better than than that still, and I think we can grow support in the next couple of months particularly if the economy continues to improve. And we have the resources now to put money back in people’s pockets and invest in infrastructue and services again,” he said.

The key question before the election, when it comes,was whether people want to secure the recovery or not.

“The economy is recovering. Because of that we can do things we couldn’t do in the past. But it’s also very fragile. There’s a lot of instability in the world and as sure as night follows day economic instability follows political instability,” he said.

He repeated that the general election “won’t be until next spring. I haven’t ordered my posters so if that’s any evidence of sincerity, the posters are not on order. Actually the decison is going to be made by the Taoiseach not by me.”

As to whether Fine Gael would consider other Coalition partners, he said “we’re running as a Government, Fine Gael and Labour together, standing on our record of fixing the economy, pointing out to people that you cant’ do anything to improve public services or improve infrastructure unless we keep the economy strong.

“We’re the ones who made the economy strong again. We’re the ones who can keep the country back on track. That’s the proposition we’ll be putting to the Irish people. I think it would be inappropriate to be making eyes at alternatgive Coalition parners until the people have made their decision.”

Meanwhile, Minister for Communications Alex White has said there is a “superficial” attraction to Independent politicians. He was reacting to the Irish Times/Ipsos MRBI opinion poll, which found Independents up one point to 25 per cent.

“On that opinion poll this morning you wouldn’t be able to form any government, any viable government,” he said.

Mr White said there was a “superficial attractiveness” to Independents but he was not so sure that would be reflected on polling day.

He insisted the best government after the general election would be a return to office of the two current governing parties, Fine Gael and Labour.

The Minister said the Coalition partners had done an “excellent job saving the country from the brink, and we want to now carry that on”.

A vote transfer pact has been struck between Fine Gael and Labour.

Mr White said the upcoming Budget would deliver for the country.

Speaking to RTÉ’s News at One programme, he said small businesspeople, students and families could see there were changes happening in the economy.

Mr Varadkar was speaking at the Islamic Educational and Cultural Centre at Coolmine in Dublin’s Blanchardstown this morning to mark the Muslim festival of Eid al Adha.

He met Imam Dr Umar Al-Qadri and members of the local Muslim community in their prayer room before the start of formal prayers at 10 O’clock.

Speaking to media afterwards he said he was there “to recognise the fact that Dublin and West Dublin in particular has become a very diverse part of Ireland and sometimes misunderstanding goes with diversity and I feel that I’ve a role as a local representative really to embrace that diversity and recognise it in all its forms.”

Asked about his own religious background, he said his father had been raised Hindu in India and his mother was raised as a Catholic in Waterford. He had also been raised Catholic but he was “not a particularly religious person”.