UUP to campaign against Brexit 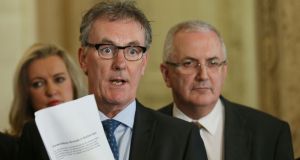 The Ulster Unionist Party will be campaigning to remain in the European Union ahead of the membership referendum on June 23rd.

The UUP is the final Stormont party to declare its position.

The following motion was passed by the party executive on Saturday.

“The Ulster Unionist Party believes that on balance Northern Ireland is better remaining in the European Union, with the UK government pressing for further reform and a return to the founding principle of free trade, not greater political union. The Party respects that individual members may vote for withdrawal on the 23rd of June.”

The DUP, TUV and Ukip are backing a Brexit, while Sinn Féin, the SDLP, Alliance and the Green Party are in favour of remaining.