Sinn Féin ‘will not sit at the back of the bus’, leader says after White House incident 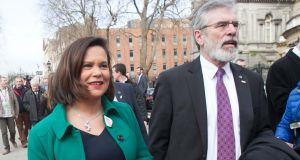 The US Secret Service has apologised to Gerry Adams after he was denied entry into a White House reception hosted by US president Barack Obama.

The Sinn Féin president was forced to wait 90 minutes outside the White House event on Tuesday night after being informed a security issue had arisen.

Sinn Féin deputy leader Mary Lou McDonald and Deputy First Minister Martin McGuinness attended the event but Mr Adams decided to leave when it became clear there was no resolution.

“The Secret Service would like to express our regret that the issue involving Mr Gerry Adams’ entry into the St Patrick’s Day reception could not be resolved in a more timely manner,” it said in a statement on Wednesday night. “Unfortunately, an administrative input error received by the Secret Service was not able to be rectified promptly.”

Earlier, Mr Adams said it was an “unacceptable development” after two decades of travelling to the US and many meetings with US presidents.

“Sinn Féin will not sit at the back of the bus for anyone. We are elected to represent citizens and we will do this.”

The White House declined to comment on the parallel drawn by Mr Adams with Rosa Parks, the African-American woman who became a civil rights icon in 1955 for refusing to give up her seat on a bus in Alabama to a white man and move to a “coloured” section at the back.

Mr Adams said he had been happy to accept the invitation to attend the Shamrock ceremony in the White House. However, he had been informed upon arrival there was a “security issue” and was asked to wait.

Speaking after the Secret Service apology, Mr Adams alleged his party members “were on a list of some sort” that forced them to face more searches than others.

Mr Adams said: “It took me an hour and 15 minutes to get my boarding pass.

“That is normal. We then get two or three extra searches.

“Younger members of Sinn Féin who are no way associated with the conflict are subjected to the same extra scrutiny. That is not a coincidence that is an administrative practice.”

Asked if parallels to Rosa Parks was over the top Mr Adams replied: “No not at all.”

Mr Adams, Mr McGuinness and Ms McDonald met the Congressional Friends of Ireland on Wednesday over the White House decision. The caucus of congressmen agreed at the meeting to write to the White House to seek clarification on what happened.

Irish-American Democratic congressman Brendan Boyle said he was unhappy and deeply angry about what had unfolded. Mr Boyle, the son of Irish immigrants from Donegal and Sligo, questioned whether the incident was a bureaucratic mix-up “or is there something more sinister going on”.