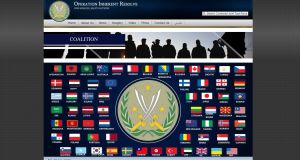 An image taken from the Operation Inherent Resolve website on September 25th, 2016, featuring the flags of 65 states. Ireland’s Tricolour is not among them. 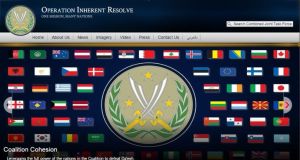 An image from the Operation Inherent Resolve website taken before the removal of the Irish Tricolour. The Irish national flag is situated in the third row from the top, third from the extreme right.

The Government contacted the United States military last week about the use of an Irish Tricolour on the website of the US-led military campaign against Islamic State.

The flag was one of more than 60 that appeared alongside images of fighter jets and battlefield scenes on the homepage of Operation Inherent Resolve, the US military’s name for the military intervention against Islamic State in Syria and Iraq.

Responding to a query from The Irish Times, the Department of Foreign Affairs said Ireland “has not and will not” participate in international military action against Isis. “Our flag should not be used in this context and we are following up,” a spokesman said. The flag was removed within five days.

Asked earlier about Ireland’s work for the coalition, a spokesman for US Central Command (Centcom) said Ireland had made “important contributions” and was considered “an important part” of the coalition of states working to defeat Islamic State, also known as Isis. Centcom said that for more information on these contributions the query would have to be referred to the Department of Defence in Dublin.

Ireland belongs to a coalition of 67 states formed in September 2014 to coordinate work on a number of fronts, including military operations, halting the flow of foreign fighters, cutting off Islamic State’s access to funding and providing humanitarian relief. Members are not expected to contribute to all aspects, a Department of Foreign Affairs spokesman said,

The spokesman said Ireland’s involvement focused on humanitarian coordination and the effort to stem the flow of foreign fighters. “Ireland does not have any Defence Forces or other personnel attached to Operation Inherent Resolve and none of the money Ireland has pledged as part of the broad coalition has gone towards the anti-Isis military campaign,” the spokesman said.

The Department of Defence said no Defence Forces personnel were involved.