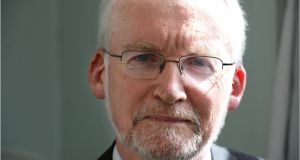 Dr Anthony McCarthy, psychiatrist at National Maternity Hospital: women pressurised into having a termination, and women exposed to strongly negative attitudes towards abortion, were likely to have “worse outcomes”. Photograph: Dara Mac Dónaill

Medical research has shown unwanted pregnancies are associated with an increased risk of mental health problems, the Oireachtas Committee on the Eighth Amendment has heard.

Prof Anthony McCarthy, consultant psychiatrist at the National Maternity Hospital, said there was no significant research carried out in Ireland in the area of mental health outcomes after induced abortion and that other international work may not be applicable to this country.

However, he said, the “best overall publication” was by the Academy of Medical Royal Colleges in the UK, which conducted a systematic review of mental health outcomes among women who had abortions .

It also found, according to Prof McCarthy, that women pressurised into having a termination, and women exposed to strongly negative attitudes towards abortion, were likely to have “worse outcomes”.

“However, for any and every woman who might seek mental health advice in this situation, it will be the specifics of her individual situation, and her distress and her history, and her personal beliefs and wishes, and often her partner’s too, which must be listened to and understood,” he said.

“The research evidence is helpful in general, but never specific to any individual life situation.”

Prof McCarthy has worked as a consultant perinatal psychiatrist for 21 years, with more than 500 women attending the clinic each year. He said most studies in this area suffer from limitations, including researcher bias and inappropriate control groups.

The patients he sees include those who have suffered a miscarriage, had a stillbirth or a baby diagnosed with a significant abnormality.

He said terminations can sometimes be potentially damaging for a patient, for example in the case of a woman suffering from severe depression.

“But, for another, she is clear that she cannot continue the pregnancy, she cannot cope and continuing the pregnancy would destroy her life. She is not mentally unwell but may be terrified of becoming unwell,” he said.