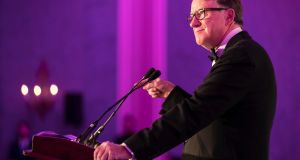 Former European Commissioner for Trade and UK Secretary of State for Northern Ireland Lord Mandelson called on the UK to remain in the Single Market and the EU Customs Union post-Brexit. Photograph: Paul Sherwood

The UK Government has adopted a “thoroughly reckless” interpretation of the Brexit referendum result, the former EU commissioner and Northern Ireland Secretary, Peter Mandelson, has said.

Speaking in Dublin he said the London Government was determined not just to leave the EU but “every other single bit of it as well”.

The Conservative government wrongly believes it can negotiate a deal that will allow for UK autonomy while maintaining levels of trade with the EU, he told a meeting of the British-Irish Chamber of Commerce in Dublin.

He was not confident about the potential to negotiate a “bespoke” arrangement for the border between the Republic and Northern Ireland that would amount to a “derogation” from the rules that apply to everyone else.

People on the island of Ireland are “hugely better off” with the current whole-island economy and hundreds of thousands of people will be affected if it is disrupted.

Public opinion in the UK on the matter of Brexit has not moved significantly since the referendum, Mr Mandelson said, before adding: “not yet. We will see over the coming year.

“Brexit will affect public services, the economy, security and the UK’s ability to influence what happens elsewhere in the world.

“Britain is going to become a smaller country, economically and politically.

“This will affect its neighbours.

“The movement of financial services and other businesses from the UK to Ireland and elsewhere, is going to continue,” he said.

Brexit will also affect Northern Ireland where the London and Dublin governments share a role in protecting what has been achieved over the past twenty years.

People in the UK would be “completely dismayed” if the Northern Ireland situation was mishandled.

The London Government’s Brexit policies are being driven by the internal politics of the Conservative Party, which has been putting politics before the economy and the national interest, Mr Mandelson said.

The negotiations between London and the EU involved “people speaking past each other as if they were from different planets.”

The London Government’s view is that the UK can have autonomy on trade and economics and regulation, and keep its high level of integration with Europe, if a practical approach is adopted.

It cannot see that these two matters are a trade off and that real choices have to be made. It does not understand, he said, that the single market and the customs union involve common rules that are uniformly enforced.

There has to be a trade off it the UK wants to maintain anything like the trade relationship it currently has with the EU, the former Labour Party minister said.