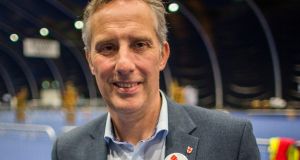 DUP MP Ian Paisley said he will refer himself to the parliamentary standards commissioner over a report that he did not declare trips paid for by the Sri Lankan government. Photograph: Liam McBurney/PA

Ian Paisley jnr has said he was referring himself to Britain’s parliamentary standards commissioner after a newspaper alleged he had accepted holidays worth £100,000 from a country he is now helping to secure a post-Brexit trade deal.

The DUP MP for North Antrim had been due to appear on the BBC Newsnight programme on Thursday night to discuss religion and politics but reportedly withdrew after it emerged the Daily Telegraph was running a front page story with the headline “The MP, the £100k gifts & the Brexit trade deal. Questions over DUP MP’s register of interests after Sri Lanka trip.”

The newspaper alleges he accepted two all-expenses-paid trips from the Sri Lankan government for his family and did not declare this on the Commons register.

The newspaper said it had seen documents indicating that Mr Paisley took his wife and children to the country in March and July 2013.

Mr Paisley, one of 10 DUP MPs propping up British prime minister Theresa May’s Conservative government through a confidence and supply arrangement, said he had consulted his lawyer over the newspaper report, which he alleged was defamatory. He said he had referred himself to the parliamentary commissioner for standards, Kathryn Hudson.

He wrote on Twitter: “The Daily Telegraph article is defamatory. It is devoid of fact or logic. Referred to my lawyer. I will refer myself to the parliamentary commissioner for standards.”

Parliamentary rules state funded trips that cost more than £300 must be declared on the register of members’ financial interests, along with income, gifts and affiliations with any groups and bodies.

In a statement, the DUP said: “Ian Paisley MP will rightly refer himself to the commissioner for standards. We await the outcome of that investigation.”

Mr Paisley reportedly did declare a third trip, in November 2013, to Sri Lanka in his register of members’ interests, costing £3,400 and another in 2012 with a cross-party group of MPs.

Earlier this week Mr Paisley posted a photograph on Twitter of himself with Sri Lankan official Amari Wijewardene outside the House of Parliament in London.

He wrote that he was “With Sri Lanka high commissioner to discuss NI-Sri Lanka trade deal after Brexit”.

Authorities there have been accused of allowing continuing human rights abuses, including torture and illegal detention.

Mr Paisley has been vocal in his support for the Sri Lankan government in recent years.

In 2013 when questions were raised over whether Queen Elizabeth should be involved in a Commonwealth heads of government meeting in the country Mr Paisley said he was “startled” at the view she should not.

“We should stretch out our hand to Sri Lanka; we should not step on Sri Lanka,” he said at the time.