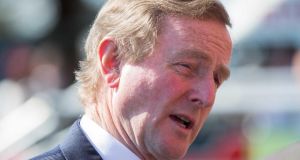 Taoiseach Enda Kenny says he Government needs to look at the ‘consequences of any such decision’ by the UK to exit the European Union. Photograph: Inpho

The exit by the United Kingdom from the European Union would be a matter of “very serious concern” for Ireland, Taoiseach Enda Kenny has said.

Speaking on his way into a Cabinet meeting on Wednesday, Mr Kenny the British people had an absolute right to make their own decision, but if they voted to leave the EU it would have “very serious consequences” for Irish people.

He was responding to a report that the United Kingdom’s exit from the European Union could be more costly for Ireland than it would be even for the UK itself.

A report from a leading London think tank has found that at UK exit from the EU would be more costly for Ireland than for the UK itself.

While the UK could take major “actions” to offset the negative effects of life outside the EU, if it quits, but this “may be more difficult for Ireland” to do because of the Border with Northern Ireland and its dependence on Anglo-Irish trade, Open Europe warned.

Mr Kenny said the Government needed to look at the “consequences of any such decision because it would impact on Ireland economically and in so many other ways,” he said.

“Obviously they’re our largest trading partner so there would be serious implications for Ireland if British people decide to remove themselves from the European Union.”

Minister for Public Expenditure and Reform Brendan Howlin said Ireland will not remain neutral in the event of a British referendum on leaving the European Union.

“It would be a serious matter for us.”

Mr Howlin said the Government had been engaged in its own analysis of the impact of a British vote to leave the EU.

Examining the economic implications of a UK exit, Open Europe says: “Perhaps unsurprisingly, given the geographic proximity and high levels of trade, our modelling suggests that Ireland would be hit the hardest.”

In a best-case scenario, where the UK negotiated an “ambitious” free-trade agreement with the EU, Ireland would still see “a permanent loss” of 1.1 per cent of Gross Domestic Product by 2030 - a near €2 billion-a-year loss in today’s money.

However, the situation would be much worse if the UK has to fall back on World Trade Organisation rules.

“Ireland could see a permanent loss to GDP of 3 per cent in 2030. This means Ireland would actually be worse off than the UK in such a scenario,” the study says.

Meanwhile, a customs border - which would be needed even if a free trade deal is reached to govern zero duty exemptions - would further complicate future Anglo-Irish trade, while a UK exit would mean that Ireland would have to pay nearly €200m more in EU budget contributions per year.

However, Ireland’s close links with London and euro zone membership mean it is “well-placed” to broker a deal a deal between the UK and the rest of the EU if the Conservatives win May’s general election and David Cameron goes ahead with his referendum plan, it adds.

Pointing out that it is in Ireland’s “self-interest to support European Union reform”, Open Europe says a successful Irish action would be likely to “help reduce the chance of Brexit and to increase the cost of it for the UK”. It also says Ireland has the most to gain from some of the reform London wants.

“How this change to the balance of power would affect the future economic performance of the EU is difficult to quantify. But it is fair to assume that, without the UK, there is a high chance that the rest of the EU would become more inward-looking and less globally competitive,” it says.

Ireland could gain if foreign multinationals chose it if the UK was “unable to secure the access to EU markets that it currently enjoys and foreign firms were looking for alternative gateways into the EU’s single market.

“If, on the other hand, the UK significantly deregulates and liberalises to become an even more open economy . . . it could be an even more attractive location for investment,” Open Europe adds.

1 Coronavirus: Two more deaths confirmed amid concern over new clusters
2 Cluster of Covid-19 infections at Kerry ‘house party’ investigated
3 Paschal Donohoe’s victory seen as a revolt against EU’s ‘big four’
4 US tours to Ireland: ‘No one wants to travel at this point’
5 The things the Taoiseach doesn’t talk about in public
Real news has value SUBSCRIBE