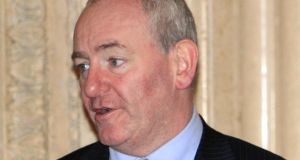 Durkan (54), who is in his third Westminster election campaign, having also served as deputy first minister, blames the DUP and Sinn Féin for the latest logjam. Photograph: Peter Muhly/AFP/GettyImages

While canvassing on the streets of Derry, Mark Durkan says he detects an “anti-politics vibe” on the doorsteps. It’s a reaction he has been experiencing for a number of years now.

That’s hardly surprising, he says, considering the stop-start nature of politics here, not to mention that when this general election is out of the way, the first item on the political agenda will be trying to stop the Northern Executive and Assembly crashing.

But what’s new? It seems as if it’s just regular Northern Ireland “Snafu” politics: situation normal, all fouled up.

“People don’t like what is happening at Stormont; they like even less what isn’t happening,” says Durkan, outgoing SDLP MP for Foyle. “We have the difficult part of trying to explain to them that nobody shares the frustration at the way the process gets into these stalemates and stand-offs more than us.”

Recently Sinn Féin senior negotiator Alex Maskey warned that such was the deadlock over welfare reform he feared for the Executive and Assembly. “At this present time, I couldn’t give great hope as to the sustainability of the political institutions, because if it requires an agreement on the basis of the welfare reform deal we are getting at present from Westminster, then a deal is not on offer.”

“Stop Tory cuts by stopping Stormont? How does that work?” 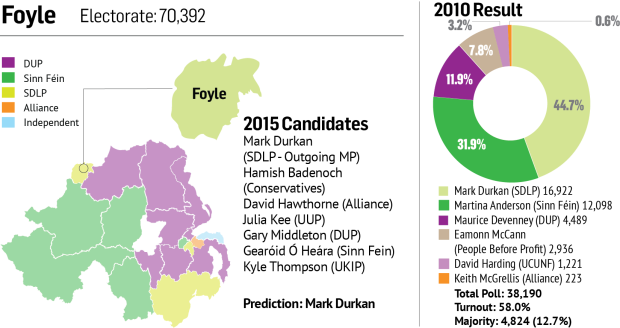 It’s a conundrum for sure. If David Cameron is returned, it seems the Northern Executive has a choice: accepting some form of welfare change or rejecting reform with the collapse of Stormont. And if Stormont crumbles, welfare reform will be imposed from Westminster regardless. A Catch-22.

Of course if Ed Miliband wins, maybe the welfare changes won’t be as severe. But that’s a “maybe”. Labour seems just as committed to reducing the deficit as the Tories.

Durkan (54), who is in his third Westminster election campaign, having also served as deputy first minister, blames the DUP and Sinn Féin for the latest logjam. The political paralysis is an “indictment of their performance and their lack of strategy”, he says.

But that’s a problem for after the election. In the meantime what’s mainly on Durkan’s mind is holding his Westminster seat, which he first won in 2005 after his friend and mentor John Hume stood down. In Hume’s last outing in 2001, his majority was 11,550.

While he is the favourite to be returned, Durkan faces a battle. The five main parties – the DUP, Sinn Féin, the SDLP, the Ulster Unionists and Alliance – as well as the Conservatives and Ukip are competing in Foyle.

But in this predominantly nationalist constituency the real contest is between Durkan and former Sinn Féin Derry city councillor Gearóid Ó hEára (61), an Independent member of the policing board. In 2005, Durkan defeated Sinn Féin’s Mitchel McLaughlin by about 6,000 votes. In 2010, he defeated Martina Anderson, now a Sinn Féin MEP, by close to 5,000 votes.

Ó hEára is a former mayor of Derry and has a reputation for getting things done. He was instrumental in bringing the all-Ireland fleadh to Derry in 2013, which brought in 500,000 visitors and revenue of £42 million. He is also very involved in the Irish language cultural and educational sector.

Ó hEára feels he has a chance of causing an upset. “There is no doubt that Foyle has been a stronghold of the SDLP because of John Hume but John Hume’s majority has been whittled away every election since he stood down,” he says. “The graph of the Sinn Féin vote is going up; the graph of the SDLP vote is coming down.”

The difficulty for Ó hEára is that some tactical unionist voting may again give Durkan the edge.