Two key Bills will be timed out by election announcement 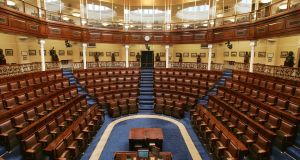 Empty seats . . . but the Oireachtas has been busy, passing 253 Acts during this Government’s five-year term. Photograph: Alan Betson

Two key pieces of legislation now look certain not to have completed their passage through the Oireachtas before Taoiseach Enda Kenny dissolves the 31st Dáil.

The Government has tried to expedite the passage of the Technological Universities Bill 2015 and the Criminal Justice (Sexual Offences) Bill 2015 through the Oireachtas before the election was called.

However, even if the Taoiseach delays the dissolution of the Dáil until later in the week, neither Bill is at a sufficiently advanced stage to allow them to complete all stages and be signed into law.

Last week Tánaiste Joan Burton sought cross-party support for the Sexual Offences Bill, which will make it an offence to pay for sexual services from a prostitute. However, that was not forthcoming.

A number of agencies and groups, including the Immigrant Council, have campaigned for this Bill. However, it met with some very strong resistance in the Oireachtas, not least from David Norris in the Seanad, who disagreed vehemently with its premise.

As well as conferring university status on several of the leading institutes of technology, it gave a statutory backing to the mechanisms involved in amalgamating all the colleges of the Dublin Institute of Technology into a single campus in Grangegorman.

While the office of Government Chief Whip Paul Kehoe has published a full schedule for this week, the Dáil will only sit up until the time the Taoiseach announces he is seeking the dissolution of the Dáil.

He is expected to make the announcement in the Dáil chamber, although it is in his prerogative to go to Áras an Uachtaráin to make the request of the President without reference to the Oireachtas.

With neither of these two Bills likely to be enacted, it will mean that four pieces of legislation have completed their passage through the Dáil during January.

In addition, the Dáil last Thursday approved changes to its own standing orders that will pave the way for the ceann comhairle of the next Dáil to be elected by secret ballot.

In all, 253 Acts have been passed during this Government’s five-year Dáil term, the most of any government since the foundation of the State. That compares to 209 Acts for the 2002-2007 Fianna Fáil government, the last time a five-year term was completed.

A total of 129 Acts were passed in the 3½ years of the last Dáil between 2007 and early 2011, during which Fianna Fáíl and the Green Party were in power.

Róisín Ingle: How to eat out in a pandemic. Don’t do what I did