Too many chiefs in fire service, Sinn Féin ardfheis hears

21 chief fire officers in State, one in four euro for service spent on administration 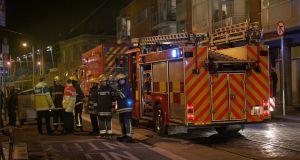 There are “too many chiefs and not enough Indians” in the fire services, the Sinn Féin ardfheis has been told as delegates voted in favour of an all-Ireland fire authority.

On the second day of the national conference at the Convention Centre in Dublin, a Bray, Co Wicklow delegate told the ardfheis that one in every four euro spent on the fire service went on administration and bureaucracy and the creation of a national authority could save €70 million.

In 2007, two Bray fire fighters, Brian Murray (46) and Mark O’Shaughnessy (26) died while fighting a blaze inside a disused factory at Adelaide Villas in Bray. Changes in how emergency calls to the fire service were processed were introduced following the deaths.

He added that London also has only one fire officer.

A Grant Farrell Sparks report from 2002 recommended the creation of a national fire authority and delegates were told that the fire service could be properly funded without having to rely for resources on local authorities.

The ardfheis rejected a 2013 Government document Keeping Communities Safe, which was described as “primarily a cost-cutting exercise which would have serious implications” for fire service members and the general public.

Delegates also voted for the creation of an all Ireland body to standardise speed limits and road traffic signs.

During the session on the environment, delegates also voted to call on the North’s authorities to introduce the metric system “for all traffic and related road signage to bring it in line with the rest of the island”.