Tobacco firms to argue against plain packaging for cigarettes 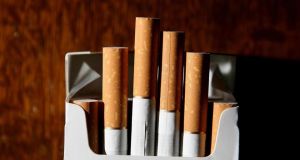 Oireachtas committee is to discuss proposed legislation that will require tobacco products to use plain packaging. Photograph: PA

The Law Society will attend a meeting of the Oireachtas Health Committee today to outline its strong opposition to the Government proposals to introduce legislation that will require tobacco products to use plain packaging.

The society’s director general Ken Murphy will be its principal representative at the meeting today to discuss its submission on the legislation, and to discuss its concerns that a plain packaging regime will undermine registered trade mark, and design, systems and will amount to an “expropriation of brand owners intellectual property rights’.

The submission was prepared by the Law Society’s intellectual property law committee.

Speaking ahead of the meeting, Mr Murphy told The Irish Times the views contained in it represent those of the Law Society as a whole, and its 10,000 members, and have been endorsed by the society as a whole, rather than the committee.

Mr Murphy also said the purpose of the Law Society submission was not to protect the tobacco industry, rather the wider effect and impact such a law would have on intellectual property rights, trade marks, in other areas.

“There is a real concern also that plain packaging in the tobacco industry is just the beginning of a trend that will severely undermine intellectual property owners’ rights in other sectors such as alcohol, soft drinks and fast foods.”

It pointed to a number of other issues such as challenges against Ireland for violating international obligations, challenges under the Constitution, the possibility of increased counterfeiting of cigarettes, and a loss of rights.

In correspondence to the committee, the Law Society said some of the members of the committee or the (large) firms in which they practice have provided services to the tobacco industry.

It goes on to state that no entity in the tobacco industry was involved in the preparation of the submission or had sight of it in advance of submission.

In addition, Mr Murphy said the reasons underlying the report were concerns about trade mark and intellectual property rights in a wider context that went far beyond the narrow interests of the tobacco industry.

In an email yesterday, chair of the committee Patricia McGovern said the society’s concerns about the Bill were well set out in the submissions and its concerns were clearly stated as extending not just to tobacco but to alcohol, soft drinks and fast food.