To pull down one government was extraordinary, to pull down two is inexplicable 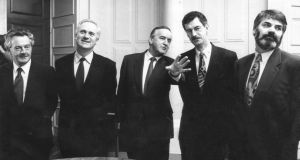 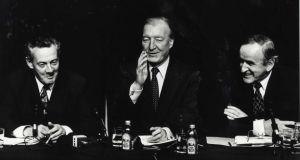 On the evening of July 29th, 1994, the chairman of the long-running inquiry into malpractice in the beef industry, Mr Justice Liam Hamilton, delivered a single hard copy of his report and a computer disk to then minister for agriculture, Fianna Fáil’s Joe Walsh. What followed is one of the most surreal episodes ever to unfold in Irish government offices.

The taoiseach, Albert Reynolds, and his advisers locked themselves into a section of Government Buildings with the only copy of the report. When Fergus Finlay, the most senior adviser to Albert Reynolds’s coalition partner, Labour leader Dick Spring, arrived looking for a copy, he was refused admittance.

Reynolds and his advisers then filleted the report, extracted two short quotations out of context, and issued a statement to the media claiming the taoiseach had been “totally vindicated”.

It was a kind of political coup, but one that irreparably damaged Reynolds’s relationship with Spring and, in effect, destroyed his own political career.

Fifteen minutes after the press statement was issued, Spring phoned The Irish Times from his home in Tralee to say that the statement did not represent his views or those of the government as a whole. The collapse of trust was out in the open and the collapse of the coalition was only a matter of time.

This self-destruction was bizarre – all the more so because the same issue of The Irish Times that reported these chaotic goings-on also reported that Reynolds and Spring were on the brink of delivering a historic achievement: a ceasefire by the IRA. What was even more extraordinary was that this was the second time Reynolds, like an enraged Samson, had pulled down the pillars of his own government over the same beef tribunal.

In October 1992, when he gave his sworn evidence to the tribunal, he seemed to deliberately accuse his then tánaiste, the Progressive Democrats leader Des O’Malley, of perjury. Quite out of the blue, he announced that O’Malley, in his own earlier sworn evidence, had knowingly given a “dishonest” account of the size of a legal claim being pursued by the giant beef processor Goodman International against the State.

Given an opportunity to withdraw or soften this accusation, he repeated it, leaving O’Malley with no real option but to pull his party out of the coalition. What was especially strange was that the charge had no substance – the Goodman claim was open-ended, so it was not possible to say with any certainty what it might amount to. It had all the appearance of revenge on O’Malley for having made some of the allegations that led to the tribunal’s establishment.

And this is the big mystery at the heart of Albert Reynolds’s career: why, exactly, did the beef tribunal, and the accusation that he had improperly favoured Larry Goodman’s beef empire when he was minister for industry and commerce in 1987 and 1988, create such self-destructive rage in such an otherwise cool customer?

There was something about those dealings with the beef baron, some odd fear, that haunted Reynolds and that triggered, even at the height of his success, acts of political suicide. The problem for historians of the era is that the precise source of that fear remains obscure.

The basic facts are plain enough. There is no doubt that in his role as minister for industry and commerce, Reynolds gave extraordinary State benefits to Goodman. Nor is there any doubt that he did so against official advice and in a manner that gave Goodman huge advantages over his Irish commercial competitors. Crucially, he also seems to have done this without establishing that the huge subsidies he gave to Goodman would be of any benefit at all to the troubled Irish economy.

The beef tribunal found no evidence that any of these decisions was “in any way based on improper motives, either political or personal”. In a sense, this finding, though obviously a welcome endorsement of Reynolds’s personal integrity, makes those decisions even more mysterious. The tribunal discovered no corruption but was equally unable to find any objective reasons of the “national interest” why Reynolds acted as he did.

The benefits that Reynolds gave to Goodman came through a scheme called export credit insurance (ECI), under which the State guaranteed that if an exporter of Irish goods was not paid by its client, the State would stump up the money instead.

ECI had been discontinued for Saddam Hussein’s Iraq, which was then at war with Iran, and was judged to be far too big a risk of non-payment. (The odds were put at 50/50.) But Reynolds overturned this judgment and allocated the then huge sum of £270 million – the bulk of which was given to Goodman. Moreover, three other Irish meat companies seeking to sell beef to Iraq were cut out of this lucrative deal.

Officials advised strongly against this but Larry Goodman seemed to have significant powers of persuasion in relation to Albert Reynolds. Goodman told the beef tribunal of a meeting with Reynolds in April 1987 at which he told the minister, in relation to ECI: “we are entitled to it and don’t go off giving it to others”. The tribunal found that in relation to this and other meetings, Reynolds “accepted the arguments put before him by Mr Goodman . . . without any independent appraisal.”

The strangest aspect of this decision to put so much public money at risk is that Reynolds had strong evidence at the time that the bulk of the beef Goodman was sending to Iraq was not even bought from Irish farmers. Most of it (84 per cent) was bought out of European Union cold stores and about a third was not even Irish in its ultimate origin.

In fact, as subsequently emerged in US Senate hearings, the Saddam regime was running a giant scam, routinely switching ECI from western governments for food imports to guarantee arms supplies.

In 1989, in an interview with the then business editor of the Sunday Tribune, Reynolds accepted that “a large portion of the meat came from intervention beef which does nothing to help Irish industry” – a statement he later denied making.

Thus, the State (whose finances were then in crisis) was taking a huge risk even though, as the tribunal report found, “the benefits to the Irish economy arising from such exports were illusory”. The only person to whom the benefits were not illusory was Larry Goodman.

During the period when these decisions were being made, Goodman’s organisation was exploring possible business links with Reynolds’s pet food company, C&D, whose chief executive was in negotiations with a venture fund backed by Goodman. Goodman’s senior lieutenants discussed with C&D a joint venture to develop new packaging.

Albert Reynolds told the tribunal he “wasn’t part of the negotiations” and that “nothing came of it”.

Given that there was no evidence of improper motives, it is striking that those around Albert Reynolds displayed an extreme nervousness in relation to the tribunal’s inquiries. It was Reynolds’s legal counsel who objected to one line of questioning in relation to ECI on the grounds of cabinet confidentiality – an objection that was upheld by the Supreme Court and that led the tribunal to report that it could not determine the factors that influenced government decisions on ECI.

According to the Barristers’ Professional Conduct Tribunal, Gerry Danaher, a senior counsel on the State legal team and a close associate of Reynolds, warned Adrian Hardiman, counsel for Des O’Malley (and now a member of the Supreme Court), that it “would not be good for Hardiman’s career to cross-examine An Taoiseach” and told Mr Hardiman’s wife that “the Fianna Fáil party was likely to be in power for a long time and had a long memory”.

There is nothing to suggest that Reynolds was aware of these friendly warnings, which in any case had no effect on Hardiman’s rigorous cross-examination. But they do give a glimpse into the siege mentality of those close to Reynolds in relation to the beef tribunal.

For whatever reasons, the decisions he made in 1987 and 1988 to benefit the Goodman group loomed large in Albert Reynolds’s mind, even when he was on the brink of achieving a historic breakthrough in the Troubles.

Reynolds famously said it was the little things that tripped you up, but in his own mind the arcane dealings over an obscure State scheme were never little things – they were big enough, and explosive enough, to shatter an otherwise remarkable political career.

To pull down one government over them was extraordinary, to pull down two is inexplicable. In future years, historians will wonder what it was all about. They will find at the heart of the Albert Reynolds story an enduring enigma.