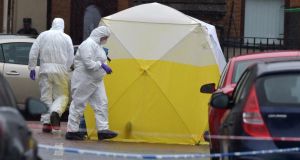 May 12th: The PSNI rules out dissident republican or loyalist paramilitary involvement.

August 12th: Former IRA member Kevin McGuigan (53) shot dead in east Belfast. Many believe he was killed in revenge for the death of Mr Davison. The two men had been involved in a personal dispute.

One of the arrested men - Patrick John Fitzpatrick (53) - appears in court charged with possession of a weapon with intent to endanger life. The others are released.

Sinn Féin president Gerry Adams rejects allegations of IRA involvement and says that group left the stage in 2005. First Minister Peter Robinson reiterates a warning that Sinn Féin will face expulsion from the Executive if there was IRA involvement.

August 22nd: PSNI Chief Constable George Hamilton says the IRA still exists, but is not on a “war footing”. He says the IRA is committed to “promoting peaceful political republicanism”.

August 26th: The UUP announces its intention to resign from the Executive. Garda Commissioner Noirin O’Sullivan insists the force has never denied the existence of the IRA after she’s criticised for a letter she wrote, dated February 19th, 2015, in which she said the Garda had “no information or intelligence” to support claims the IRA continued to exist and was involved in fuel laundering, cigarette-smuggling and counterfeiting.

September 9th: Senior republicans Eddie Copeland, Brian Gillen and Bobby Storey, who is Sinn Féin’s northern chairman, are arrested in connection with the McGuigan murder. The DUP threatens to resign from the Executive if the Assembly is not adjourned or suspended until the crisis is resolved.

September 10th: A woman is held over the McGuigan murder, bringing to 17 the number detained over the killing.

The DUP bid to adjourn the Assembly is defeated and Mr Robinson announces he is to stand aside, while three of his four Executive ministers are to resign with immediate effect. Mr Storey, Mr Copeland and Mr Gillen are released from custody without charge.