Time for citizens to forge a better future for our country

Opinion: A New Vision for Ireland 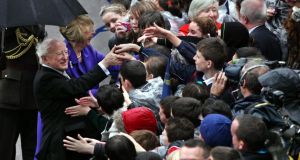 ‘I believe we now have a generational opportunity to ask probing questions about the type of society we wish to build together, and the type of public world we wish to share with one another and with future generations.’ Above, President Michael D Higgins and his wife Sabina meet young students following the presidential inauguration ceremony in 2011. Photograph: Matt Kavanagh

On my election as president in November 2011, I made a commitment to initiate a number of projects during my time in office, which would lead a national debate on the most pressing issues facing contemporary Irish society.

The first of these initiatives – Being Young and Irish – focused on the particular challenges facing our young people. Many issues identified by the participants in that process spoke directly to the lived experience of young people. However, I was particularly struck by the extent to which the young people involved articulated a broader vision for a better Ireland and called for a national examination of values.

Those young people recognised, as I do, that the national debate on how Irish society might respond to the financial and economic crisis has been partial and lacking an essential dimension: the place of ethics in our lives together and the urgency of rebuilding trust between citizens and the institutions that serve them. Our contemporary historical moment has been characterised by a loss of trust in the institutions that previously enjoyed unquestioning acceptance as to probity among the Irish public. Institutional failures have also precipitated an even more fundamental crisis of identity about how we define ourselves as a people and a society. We have witnessed a fragmentation of the public space which has disempowered our citizens from fully participating in the important socio-economic choices which affect them, and excluded moral and ethical considerations from those choices.

Friendship, care, trust, justice and equality – these are moral-ethical principles that matter greatly to our citizens. However, these values have become separated from the dominant economic discourse which has underpinned the global financial collapse. If we are to recover, and flourish, we must understand the structural, philosophical reasons for the failures we have witnessed and we must reconnect the economic, the social, and the political to the moral.

I believe we now have a generational opportunity to ask probing questions about the type of society we wish to build together, and the type of public world we wish to share with one another and with future generations.


Inclusive discourse
To address that demand for a more inclusive discourse, one that could explore these issues, I launched, earlier this year, the second thematic initiative of my presidency, which is examining the role of ethics in Irish life. The aim of “The President of Ireland’s Ethics Initiative” is to place the citizen at the centre of the debate about the future of our society by recovering a strong sense of the public world, and by using that public discourse to raise questions that go to the heart of the choices facing our society and institutions.

One field of inquiry relates to the role of the citizen in discussing and determining the economic, social and political choices which affect him or her. What constitutes our shared public world and how should it be protected and enriched? How can a deliberative democracy work with tools of participation? And how can we achieve a pluralist scholarship offering a diversity of options and models about how economy and society should be connected?

A further field of inquiry relates to what is cherished and valued. What is necessary to human flourishing? What human capabilities does Irish society encourage, genuinely enable, or block? Can we balance the freedoms and the flourishing of citizens with the needs of the public good? What is an appropriate discourse on the relationships between citizens and between citizens and the State? What should be the character and content of civic virtue in a republic responding to present circumstances and future challenges?

Enthusiasm
Since I launched this initiative in February, I have been greatly encouraged by the enthusiasm of our citizens for engaging with these profound questions and for formulating an alternative set of principles by which Irish people can represent and project their lives together. The response from all levels of our society has been remarkable.

The early stages of the initiative will take place within our universities and colleges of technology, where already 50 seminars and other events are planned for this calendar year. As the initiative develops, it will, hopefully, reach out to the wider community. This has already been planned by some of the participating institutions.

In embarking on this process of questioning we will need to draw on all of our intellectual resources, and there is much to draw on. We have shown, throughout our history, that at our best we are a people of intellect and imagination. We have a uniquely informed and talented population of young people. We also have an older population who continue to display an impressive commitment to the values of responsibility, care and participation in our communities.

Irish society is not unique in having to confront such existential questions. But if Ireland can show that our collective response to our contemporary ordeals is to undertake a fundamental enterprise of critical reflection directed at the values and principles around which we want to rebuild the structures of our living together, what might that not do for our reputation and standing?

As we begin this national conversation, I am inviting all of the citizens of Ireland to engage and take part in what will be a stimulating and creative process of reimagining Ireland. As we move closer to the centenary of 1916, what could be more fitting a way of commemorating the idealism of our founding fathers; or of giving content to a republic worthy of the best of ourselves, of head and heart?


See president.ie for events and calendar for The President of Ireland’s Ethics Initiative.This is the first in a series of occasional articles which will set out ideas for A New Vision for Ireland