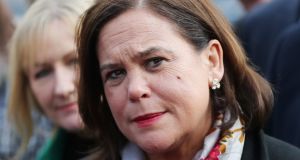 Mary Lou McDonald arrived in Leinster House on Thursday with her new friends – a lot of new friends.

The 37 members of the new Sinn Féin parliamentary party (with senators to come) gathered first in Buswells Hotel across the road and afterwards on the plinth in front of Leinster House, where they heard their leader declare that for Fine Gael and Fianna Fáil to exclude them from government would be “a slap in the face” to the electorate.

Meanwhile, within shouting distance, the Fianna Fáil leader Micheál Martin was addressing his bruised TDs, and reaffirming to them his refusal to form an administration with Sinn Féin.

Many of them are grumpy with Martin, but it is a not a different party to what it was last week. They endorsed his firm no to coalition with Sinn Féin, and gave him a mandate to pursue government elsewhere.

A bit further away, up the road in Government Buildings, Taoiseach and Fine Gael leader Leo Varadkar was keeping his head down amid the crossfire while considering his options.

The truth is that while negotiations between the smaller parties and Sinn Féin will occupy the agenda this week – and probably into next week – they do not offer McDonald a route to government. The numbers may be cruel for those who dream of a left-led government, but they are clear. If she wishes to form a majority government, McDonald will have to cut a deal with Fianna Fáil or with Fine Gael. And – for the moment anyway – they are not talking to her.

All the attention is on Fianna Fáil and Sinn Féin for now. But it will be interesting to see if McDonald’s letter to Fianna Fáil is followed by one to Fine Gael. If she does approach Varadkar, she will get a similar answer. The reality is we are in a three-way stand-off, and it could continue for some time.

Buoyed by its spectacular success in the general election last weekend, Sinn Féin has made all the running this week, as Fianna Fáil and Fine Gael licked their wounds. McDonald has had several meetings with the smaller parties, with more likely in the coming days. But some of the people involved in those meetings say they are preliminary at best. Nobody is horse-trading on policy yet. Nobody is drawing up documents yet. Nobody is making decision yet.

As Sinn Féin constantly reiterates, it came first in the election as measured by the share of the vote. As it knows equally well, however, it needs 80 votes in the Dáil to form a government. And the party is a long way away from that. With the Labour Party out of the coalition reckoning after today, the prospect of a left-wing coalition led by McDonald and excluding both Fianna Fáil and Fine Gael – to the extent it ever existing in reality – has more or less evaporated. So can McDonald persuade Fianna Fáil or Fine Gael to do business? It’s not going well so far, anyway.

Fianna Fáil TDs backed their leader to exclude Sinn Féin and seek to form a coalition with other parties. He will now talk to the Greens, Labour, the Social Democrats and Independents (conversations with Solidarity-People Before Profit, together or separate, would seem otiose) about government possibilities. He can only get so far. The laws of parliamentary arithmetic apply just as much to Micheál Martin as they do to Mary Lou McDonald – to form a majority government he will need to talk to Leo Varadkar.

People in Fine Gael are at present content to contemplate the relative quietude of opposition. But sitting on their hands may not be a strategy that is sustainable in the medium term – especially once the Dáil meets, and fails (as is likely) to elect a taoiseach and the numbers are clarified for everyone. Remember too that the Brexit negotiations are due to recommence in early March; in late March European leaders will discuss their progress at a summit in Brussels. By then the pressure will have increased a few notches on everyone to form a government.

How the passage of time changes the political context – and therefore the way that the parties, their leaders, their TDs, their supporters in the constituencies, and the wider public view matters – is for now the great unknown. Does the public mood move from “We must have change” to “We must have a government”? Does the changed context change the parties’ view of where their own interests lie? Ultimately that it what might break the deadlock that is now emerging.