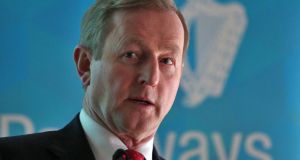 Taoiseach Enda Kenny at the launch of Pathways to Work 2016-2020 at the Guinness Storehouse in Dublin. Photograph: Colin Keegan/Collins Dublin

The Government has said that 50,000 long-term jobless people will be moved into employment over the next five years as part of its new jobs strategy.

The next phase of the Pathways to Work programme was launched by Taoiseach Enda Kenny and Tánaiste Joan Burton at the Guinness Storehouse in Dublin on Wednesday.

Ms Burton, the Minister for Social Protection, said that a total of 75,000 people who were unemployed over the long-term have found jobs since the launch of the Pathways to Work scheme in 2012.

She said the programme’s various initiatives, including the creation of 60 Intreo offices, JobsPlus, Momentum and the Youth Guarantee, had all helped to reduce the unemployment rate from 15.1 per cent to 8.8 per cent in the period since its inception.

Pathways to Work operates in tandem with the Action Plan for Jobs, and attempts to match the skillsets of people who are unemployed with new vacancies as they arise.

The new strategy will have an additional focus on helping people with disabilities to find work.

“Expanding activation as a tool of social inclusion will be an important element of this strategy, which sets a target for boosting the employment rate for people with disabilities so that those who wish to do so can participate more fully in society,” Mr Kenny said.

Ms Burton said: “Behind the scenes, Pathways was responsible for arguably the largest reform in the public service in a generation.

“The public employment services were completely overhauled. New Intreo Centres were established across the country so that jobseekers could get their income and employment supports in the one place for the first time.

“This involved the merger of the community welfare service, Department [of Social Protection] staff and FÁS staff, and the doubling of dedicated caseworkers to work with jobseekers.

“In tandem with those reforms, there were new engagement processes with jobseekers, and new schemes, such as JobsPlus and Momentum.

Minister for Education Jan O’Sullivan and two Ministers of State with responsibility in this area, Kevin Humphreys and Damien English, also attended the launch.

Ms O’Sullivan announced at the event that approval has been given for 25 new apprenticeship courses in job sectors such as financial services, information technology, and modern engineering.