The men and the message at heart of FF revival

Micheál Martin was probably the star turn of the campaign 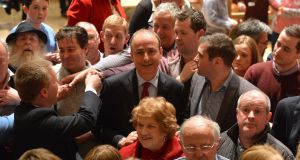 The first thing that can be said about Fianna Fáíl’s huge election is that nobody saw it coming, not even Fianna Fáil.

Its success is a mixed blessing. It has created a huge - and unexpected - headache for the party. Echoing perhaps the dilemma of a big lotto winner, it doesn’t have a clue about how it’s going to spend its winnings.

In their wildest moments of optimism, party strategists reckoned 40 seats represented the Everest in terms of success.

So how was it achieved? It is explained both in terms of a short view and a long view. The first is the actual three-week election campaign in which the party did not put a foot wrong.

Its slogan – “An Ireland for All” – worked for them and their key messages around fairness, all portraying main rival Fine Gael as a party of the wealthier.

The strategy worked. It was helped by the fact Fine Gael ran an incredibly poor campaign, extending from the slogan (which antagonised people), to the clumsy message on abolishing USC, to an uneven performance by Taoiseach Enda Kenny.

Against that, Micheál Martin was probably the star turn of the campaign. The television debates suited him as he is a very combative debater and is quicker at thinking on his feet than most political rivals – even though the leaders of the smaller parties gave him a good run for his money.

Fianna Fáil bet all its chips on Martin’s leadership, taking a chance that his authority and public acceptability would carry the party through. It worked. There was criticism he was carrying the party on his back: certainly the thrust of the campaign centred around his persona.

As the metrics showed, it worked. Martin’s approval ratings shot up during the campaign in contrast to that of his three main rivals.

That said, it was hardly a one-man show. There were important interjections from other senior figures, not least finance spokesman Michael McGrath, which successfully parried an attempt by Michael Noonan and Leo Varadkar to claim there was a €1 billion hole in Fianna Fáil’s finance plans. He was able to retaliate by picking some very sizeable holes in Fine Gael’s finance plans during a decisive showdown with Varadkar on RTÉ’s Prime Time.

Another aspect of the short campaign that should be noted was the decision by Fianna Fáil to allow a “vote of conscience” on the Eighth amendment on abortion. Its decision to sit on the fence allowed the party to still present itself as anti-abortion. There is a minority – and not a tiny one – for whom this issue is paramount. On that basis, many of those would have swung to Fianna Fáil.

There was a tincture of toxicity that had not gone away from 2007, that was evident in the party losing out in the final count in some constituencies, including Dublin North West, where Paul McAuliffe was not transfer-friendly enough to win a seat.

The long-term view is probably the most important component. The party took such a battering in 2011 that it knew it had to change. It changed structurally, getting rid of archaic voting patters in favour of one-member, one-vote. It also returned to its 1926 values, drawing up a Corú (party constitution) that placed it to the left of centre.

It spent a lot of time researching its positioning, and used three elections – the local polls in 2104, the Roscommon-South Leitrim byelection, and the Carlow-Kilkenny byelection – to field test its policies.

It discoved the sentiment of a two-tier recovery was really strong among voters, with people sensing they could not get access to public services. The area of health, housing and homelessness, crime, and fairness cropped up again and again. That research became the building blocks of its manifesto. The message of fairness being key in a slowly recovering economy had huge resonance.

The party’s candidate selection was ultimately ruthless. It chose a sole candidate in constituencies where it believed it could not split the vote. That resulted in some noses being put out of joint but the decision has been fully vindicated to run the likes of Mary Butler in Waterford and Margaret Murphy O’Mahony in Cork South West.

dditionally, over the past two years, Martin has spend a lot of his downtime pounding the pavements with candidates around the country. This is part of a deliberate strategy to use candidates who had a reputation for doing the work locally, such as under-the-radar operators like John Lahart in Dublin South West and John Curran in Dublin Mid West. This is the so-called “ground war” and Fianna Fáil seems to have bested the rest.

It must be remembered there are still hundreds of thousands of people who are culturally and viscerally Fianna Fáil, albeit from an ageing demographic. Many did not vote for the party in 2011. All of these elements conspired to allow them come back to the fold, which they did in their droves.

The party now finds itself in a quandary. What next? The resistance to a coalition will be huge with its membership who will have seen all the work to bring the party back to the values of the past being undone by a centre-right alliance. The alternative is another election.

That decision is fraught with danger on both sides of the argument and will take many weeks to come to a conclusion.