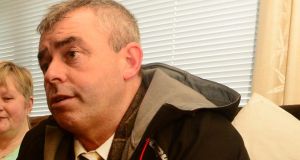 Kevin “Boxer” Moran: “The fact that these people were not prepared to sit around the table and meet shows the group is not fit for purpose.” Photograph: Cyril Byrne/The Irish Times

Two Independent TDs from areas severely affected by flooding last winter have called for the resignation of officials tasked with managing the risk posed by such events.

Their calls come after a report by the Comptroller and Auditor General found a taskforce appointed to assess flood risks did not meet for six years before last July.

Independent TD for Longford-Westmeath Kevin “Boxer” Moran said he was horrified to read the report and learn there was no preparation done by the group for a potential flood disaster.

“Imagine telling this to those people. How can they trust the Government if they can’t even hold a meeting? It is absolutely terrible,” he said.

Roscommon-Galway TD Michael Fitzmaurice said he was “disgusted” at the findings.

“These officials were tasked with the preparation of plans to prevent flooding and they didn’t even bother meeting,” he said.

“Whoever is responsible should resign or be sacked. It is not good enough. My constituents will be disgusted to learn of this . . . There has to be some ministerial responsibility, but in reality it is the officials who should have been meeting and they didn’t bother.”

The Dáil’s Public Accounts Committee is to examine the report when talks on forming a government are completed. The group, chaired by Minister of State at the Office of Public Works Simon Harris, said there was technical work carried out over the period in question.

Mr Harris said he requested the group to reconvene when he took office and insisted work was under way during the six years.

“Prior to my reconvening of the group, I would like to affirm that the work of the programme was ongoing during this period as it was mainly technical in nature.” He said it was now meeting regularly.

1 Archaeologists are ‘quite sure’ they have found Red Hugh O’Donnell’s burial place
2 Maureen Dowd: Trump has been wearing a mask for years
3 Covid-19 restriction-lifting may speed up if cases keep falling
4 Three men charged with murder of Carlow man in Australia
5 Pricewatch: Left on the shelf - what we are no longer buying
Real news has value SUBSCRIBE