Scope for reduction will not be clear until the budget, says Enda Kenny 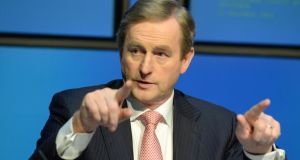 Taoiseach Enda Kenny has expressed support for reducing income tax on middle-income families but cautioned that the timing will depend on the state of the economy.

Tánaiste Eamon Gilmore and Minister for Finance Michael Noonan have already backed the notion of reduced taxes on middle-income earners.

In a Christmas interview, Mr Kenny said the scope for tax cuts would not be known until much closer to the next budget in October 2014.

“There will be no income tax increases in the next budget. That is consistent with the programme for government. The scope for any income tax reductions, which I have seen commented on, will not be known until much closer to the budget and they depend upon growth rates and job opportunities,” Mr Kenny said.

Flexibility
He said that whenever room for the required flexibility emerged, action would follow on income tax as well as jobs.

“The priority will be to reduce the very high tax rates faced by families on middle incomes,” said Mr Kenny.

He said the Government expected to get a report by April from a specially established advisory group on tax and social welfare. “That’s likely to focus on family income supplement, on child income supports and rent supplements, and on barriers faced by part-time workers moving into full-time employment,” he added.

‘Relentless push’
Mr Kenny repeated his view that in 2014 he wanted to see a “real relentless push” by the Government on jobs.

“I’ve told Ministers that. I expect all Ministers to come forward now with their own detailed plans with the structure of the medium-term economic plan. We will do that in the new year. There will be a special Cabinet meeting on jobs by end of January, early February. And I want to drive that on so that we focus on helping Irish business to grow and to export more.”

He said he hoped to open 31 new local enterprise offices around the country next year.

“These are the revamping of the local authority system which will provide, hopefully effectively, the sort of one- stop shop for people who have ideas about business or want to form a company, to find out what assistance may be available to them.”

He also said he hoped to attend at the new Intreo offices being opened by the Department of Social Protection to help people find work.

“I actually think, having seen all of this over the years, that this is an initiative which is going to pay dividend. I have seen some of the impact from the group meetings they hold with people, where they ask what you did, your experience, what you didn’t do, what you’d like to do, how you would want to make a contribution,” said Mr Kenny.

“It is about motivating people who have been in the rut of unemployment for some time to get them out of that, in the knowledge that they are respected for the contribution they can make.”