IRA was ‘right’ to fight British rule, Adams says at graveside of former chief of staff

Kevin McKenna was a ‘decent, honest republican’, mourners told at his funeral 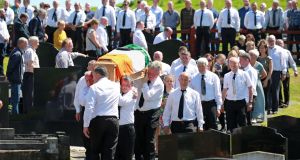 The IRA was “right” to fight against British rule in Ireland, former Sinn Féin president Gerry Adams has told mourners at the funeral of a former chief of staff of the paramilitary organisation.

Kevin McKenna, who died on Tuesday, was the leader of the Provisional IRA from the mid-1980s to the mid-1990s.

He was buried after Requiem Mass at St Mary’s Church, Magherarney, near Smithborough, Co Monaghan, on Thursday. Originally from Dungannon, Co Tyrone, Mr McKenna had lived in Monaghan since the 1970s.

Speaking at the graveside, the Louth TD described Mr McKenna as “a decent man doing his best in very difficult times.”

“The republican people of the north never went to war,” he said. “The war came to us.

“I’m mindful of those who have been hurt, and there has been hurt on all sides and healing and reconciliation is needed, but the war is over.

“The future is being written now, and as we help to write that future we will not let the past be written in a way which demonises patriots like Kevin McKenna any more than we would the generations before them.

“I think the men and women of 1916 were right,” Gerry Adams said. “I think the H- Block hunger strikers were right. I think Kevin McKenna was right.

“I think the IRA was right, not in everything that it did, but it was right to fight when faced with the the armed aggression of British rule.”

Referring to Kevin McKenna’s leadership during the first IRA ceasefire in 1994, Gerry Adams also said that it had been “right to make peace.”

“This August marks 25 years from the first IRA cessation, was an initiative created by republicans which opened up the potential for the peace process.

Kevin McKenna led the paramilitary organisation from the mid-1980s to the mid-1990s during some of the most violent years of the Troubles. Though a guarded figure, he made no excuses for the IRA’s violence.

He was one of its longest-standing chiefs of staff, leading the illegal importation of arms from Muammar Gadafy’s Libya in the 1980s. He led the IRA through the first IRA ceasefire in 1994, though he was replaced thereafter.

Men and women wearing black trousers, white shirts and black ties formed a guard of honour which flanked the coffin as it was brought to the church for Requiem Mass.

A black beret and black leather gloves sat atop of the coffin, which was draped in a Tricolour.

Bernie McGuinness – the wife of the North’s former deputy first minister, Martin McGuinness, also attended, as did his son Fiachra.

Among the items brought to the altar was a copy of the 1916 Proclamation, which the chief celebrant Father Joe McVeigh said was a symbol of Kevin McKenna’s “dedication to Irish freedom and to a united Ireland”.

Fr McVeigh praised Mr McKenna’s role in the North’s peace process. The last time he had seen him, he said, had been at Mr McGuinness’s funeral in Derry in March 2017.

“His presence reminded me how these two men had worked together to bring about a just and a lasting peace in Ireland,” he said.

At the graveside, Gerry Adams described Kevin McKenna as a “patriot” who had chosen to return from Canada in 1970 to join the IRA.

“Among the rolling hills of Tyrone, and the narrow laneways, the villages and the roads of that historic county, Kevin and his comrades relentlessly and defiantly fought the British army,” he said.

Mr Adams said that the “big challenges” of today should not be understated: “Even as we gathered here today the so called United Kingdom is disunited, yes we have quarrels to settle with our unionist neighbours and yes partition remains, but republican Ireland remains also, resolute unbowed undefeated and looking to the future.”

He said that while it was “the nature of things that the part played by republicans like Kevin during the long years of war will never be known”, he described Kevin McKenna as “the real deal: a decent, honest republican who saw off Thatcher and her ilk and brought the British government to the negotiating table.

“There was no peaceful way to end the Union and to build a new united Ireland,” Gerry Adams said. “Thanks to your efforts, Kevin, and the efforts of many others there is now a growing debate about a new Ireland and a referendum on Irish unity, and thanks to your efforts there is a pathway towards unity. Our duty is to complete that journey.”