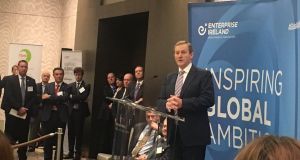 Enda Kenny said it was up to the all-party special committee to consider the recommendation of an expert commission that most households should not pay water charges. Photograph: Simon Carswell/The Irish Times

Taoiseach Enda Kenny has side-stepped the issue of whether members of the public should be refunded for the payment of water charges, deferring the matter to an Oireachtas committee.

Speaking in California on the first day of a visit to the United States, Mr Kenny said it was up to the all-party special committee to consider the recommendation of an expert commission this week that most households should not pay water charges.

The question of whether close to one million householders who paid the now-suspended water charges should be refunded in light of the recommendation from the Expert Commission on Domestic Public Water Services has riled tensions within Mr Kenny’s own party, Fine Gael.

“It’s too early to determine what the committee will do with the commission report,” the Taoiseach told reporters on the fringes of an Irish business event in Silicon Valley.

Asked whether he agreed with Minister for Housing Simon Coveney who wants households pursued for unpaid water bills when a number of Fine Gael TDs have urged the Government to make refunds, Mr Kenny said that he would wait for the Oireachtas committee to decide on a recommendation and for the matter to be put to a vote before the Dáil in March.

He did not rule out the possibility of a refund either.

“I don’t want to commit to anything now until such time as the committee is allowed to do its work,” he said, before pointing out that the Fine Gael party had unanimously agreed to a public water utility charging the public based on a metering system and water usage.

The expert commission said in a 63-page report this week that under its recommendations the “vast majority” of people will not have to pay for water. It concluded that normal household usage should be paid for by the State in the form of general taxation.

Mr Coveney has warned that paying refunds on water charges would set “a dangerous precedent” while a number of Fine Gael TDs called for refunds to be paid when the issue dominated the weekly meeting of the Fine Gael parliamentary party on Wednesday night.

Water charges, a highly charged political issue in the last general election, were temporarily suspended in June as Fianna Fáil’s price for supporting a Fine Gael-led Government and the expert commission established to decide on the future of the contentious payments.

Mr Kenny attended a reception on Wednesday night where 21 companies from Ireland exhibited their goods and services at an event hosted by Enterprise Ireland.

The Taoiseach will meet Tim Cook, Apple’s chief executive, at the company’s Cupertino headquarters in Silicon Valley on Thursday to discuss the fallout from €13 billion bill imposed by the European Commission over what Brussels called illegal state aid on Irish tax arrangements.

Mr Kenny said he had no concerns about Apple’s future in Ireland over the ruling, pointing to the growth of the company’s Irish workforce of 6,000 - becoming the largest employer in Cork - and the technology company’s plans to open a data storage facility in Athenry, Co Galway.

“Tim Cook himself has been publicly and privately very strongly in support of and is very happy with their response and their investment in Ireland over very many years,” he said.

The Taoiseach said he would give Mr Cook the same reassurances he gave others: Ireland continued to be “a very attractive location for investment from abroad” due to the quality of the country’s young, English-speaking workforce and a “static” corporate tax rate of 12.5 per cent.

Mr Kenny will also visit Facebook’s Silicon Valley headquarters in Menlo Park before travelling on to New York on Thursday night for more meetings on Friday and Saturday.