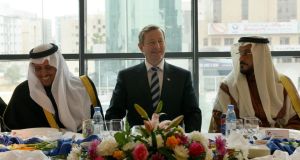 The Saudi Arabians have extended a great welcome to the Taoiseach this week on his first visit to the kingdom. Enda Kenny has been keen to compliment his hosts also and their “extraordinary” country and to discuss the “parallels” between it and Ireland.

Mr Kenny pointed to a shared history of famine, emigration and colonisation as well as the importance of “family” in both societies.

Few women
One area where Ireland and Saudi Arabia differ is on human rights and, more specifically, the role of women in society. During visits to a government ministry, the central bank and companies operating in the Riyadh area this week, sightings of local women were few and far between.

King Abdullah has decreed that women will have the right to vote and run in local elections next year for the first time. The move is a step forward but Saudi women are still not allowed to travel abroad without a male guardian or to drive.

After a meeting yesterday with crown prince Salman, the deputy prime minister, in a palace in Riyadh, Mr Kenny spoke to the Irish media also on the Enterprise Ireland trade mission to the Gulf states.

Asked if the status of women in Saudi Arabia was an issue for the Government when engaging with Saudi Arabia, the Taoiseach replied that he had spoken to a number of women who lectured in local universities. “Admittedly [the universities] are all for women which is quite a difference from the Irish situation,” he said.

Mr Kenny said he had congratulated the prince on the kingdom’s election to the United Nations’s human rights council in November at the same time as Russia, China and Cuba. “Ireland obviously will work with Saudi Arabia in terms of human rights and their participation on the council,” he said.

Golden scabbards
The Irish delegation received quite a surprise at the size of the vast palace. Inside a line of men with swords in golden scabbards stood guard as the Irish group was ushered in to meet the prince.

Economic and foreign policy issues were also discussed, Mr Kenny said, and he added that his host was “well versed” on Ireland’s economic situation and bailout exit.

“He expressed himself as very willing to work through the diplomatic services to develop links between our two countries,” Mr Kenny said, adding that the crown prince was interested in providing funding for young Saudis to work in Ireland after graduation so they could gain experience.

‘Real potential’
From there it was on to the chamber of commerce for lunch and a meeting of the Irish Saudi Arabian Business Council (ISABC), where the Taoiseach told those in attendance he saw “real potential” in the relationship between the two countries.

When the Taoiseach opened the discussion to the floor, local business figures and members of some of the 87 companies participating in the trade mission, there were a few points raised.

The Taoiseach was quick with his response. He said the Republic of Ireland should play Saudi Arabia in a friendly in preparation for the 2022 World Cup in Qatar.